Browse the article 10 Camping Comforts You Might Want to Bring 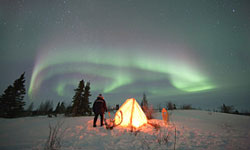 "It was the best of times, it was the worst of times," wrote Charles Dickens in "A Tale of Two Cities." And by "it" he could have easily meant camping. Watching the aurora borealis hit the night sky? Best of times. Sleeping on a quarter-inch foam pad on frozen ground? Worst of times.

But what if you'd brought a cushy air mattress instead of a thin foam pad? In fact, what if you'd packed a coffeemaker, a portable shower and a solar charger for your smartphone -- so you could take video of those green lights swirling the night sky? These little extras may not seem like much when you're lying around on your couch at home wishing your remote control were closer to your hand. But out in the wilderness, they seem like the greatest luxuries ever made.

Some people just can't get going without a cup of coffee. Lucky for you, there are some cool coffee-making gadgets for the outdoors. 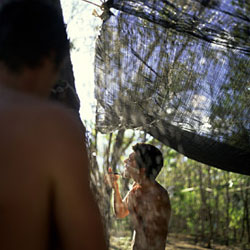 A hot shower and a shave
Aaron McCoy/Botanica/Getty Images

Anyone can hang a bag full of water from a tree and use it to shower off. But wouldn't a hot shower be so much more wonderful? You can go with a generator-powered shower or let Mother Nature do the heating:

Inevitably, if you camp, you'll eventually camp in the rain, and then you'll come to know a new kind of suffering. Wet clothes need to be dried. If you keep them on, you're more likely to catch hypothermia, and furthermore, wet socks will rub blisters on your feet. You'll need to hang your wet gear out to dry, but if it's raining, hanging your wet gear outside is a wee bit counterproductive.

Instead, bring along a tent attic, which is a mesh "shelf" that you can suspend from the domed ceiling of your tent. Lay your wet socks, shirts, gloves and other wet items on the "shelf" to allow them to dry. When it's not raining, you can still use the tent attic as a nice place to store your clothes so they're easy to reach. Popular tent attics include the Black Diamond Tent Attic, the Eureka Gear Loft, the Sierra Designs Portable Attic, and the North Face Tent Gear Loft. 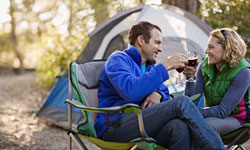 Pack your wine in a soft-shell bag and drink it out of plastic wine glasses.
Jupiterimages/FoodPix/Getty Images

You know how it works: You're groping around blindly in the dark for your tent zipper when your foot catches your tent line and you go down hard on a log with broken, protruding branches. It hurts. In fact, it really, really hurts. You don't want something like this to happen to you in the middle of the woods.

Enter clip-on LED lights. You can mark those death cords around your tent -- and any other dangerous stumps, sticks or lines for that matter -- with these small lights, so you won't trip over anything in the middle of the night. 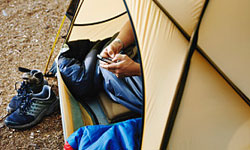 No need to unplug in the woods if you have a solar charger.
David Trood/The Image Bank/Getty Images

Just because you've decided to unplug from the modern world for the weekend doesn't mean you have to, well, literally unplug. The only problem is that keeping necessities like your laptop, tablet, smartphone, MP3 player or portable DVD player running takes some serious juice. Sure, you can use a gas-powered generator, but that's really contrary to the spirit of roughing it. Instead, consider one of these solar-powered chargers:

When choosing a camp chair, think carefully about what you plan to do in it. For example, do you plan to sit in it for endless hours on the bank of a glassy lake in the sun? If so, consider a chair with a sun canopy attachment, drink holder, side table and arm and leg rests. On the other hand, if you're backpacking, a chair is a luxury item, and you'll obviously need one that's as light as possible. A small fold-out stool may be the best choice, and even though it doesn't have a cup holder, you'll be happy to have it. 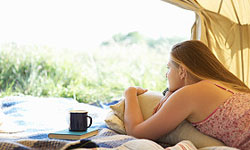 A pillow is a luxury item in the woods.
Dougal Waters/Digital Vision/Getty Images

If you're backpacking, it doesn't make much sense to stuff a bulky pillow into your pack, when your fleece pullover could easily double as a one. But some people just can't sleep unless their heads are resting on a fluffy cloud of polyester cushioning. If you're one of those people, you might as well pack a camping pillow. If you're car camping, you don't have to worry as much about it taking up space in your pack. But if you're backpacking, you'll be happy to know that many camping pillows on the market are light (about 12 ounces) and that they often come with stuff sacks. Stuffing the pillow in the sack will make it compact and also keep it dry.

Ever notice how hard it is to do simple things with your hands when your fingers are cold? For example, striking a match: very difficult to do when your digits are freezing .

Here's your solution: hand warmers. Hand warmers are little packages of ingredients -- iron, water, cellulose, vermiculite, activated carbon and salt -- that, when exposed to the air, undergo a chemical reaction and heat up and stay hot for 11 to 12 hours. In fact, they can remain as hot as 135 to 155 degrees Fahrenheit (57 to 68 degrees Celsius). If you have mittens, you can stuff them inside your mittens to warm your hands up. Or, you can put the warmers in the bottom of your sleeping bag to keep your bed warm and cozy all night. 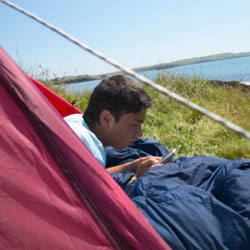 Today's Swiss Army knife or Leatherman is the smartphone, loaded up with camping and backpacking apps that'll tell you everything from how to shelter from the rain, sleet and snow to how to cook your dinner. And since you've brought your solar charger along, you can use these apps as you please. Here are some examples:

Author's Note: 10 Camping Comforts You Might Want to Bring

I grew up camping in my parents' green, pop-top VW Bus and backpacking the Cascades. Now I'm in the process of inflicting nature on the next generation -- my 3-year-old and 5-year-old kids (and at times our Labradors). We enjoy camping in the Boulder, Colo., area. Writing this article, I was surprised to see how many modern recommendations for camping gear include technology. Opposite these techno-centered recommendations was a reader comment that suggested the best camping companion for an iPhone is a hammer. I'm not quite sure which camp I fall into -- the high- or the low-tech one. But I'm sure in the coming years I'll figure that out.