Browse the article How the Walleye Spawn Works 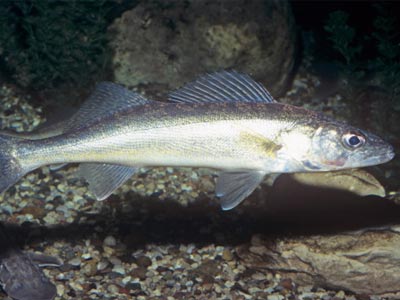 Ah, walleye. What a lovely fish. ­And one of the most fascinating times to find them is during the spawn. As the first warm days of spring thaw out the rivers and lakes, walleye start toward the spawning grounds, and fishermen head out to snare them [source: Pitlo]. This tasty freshwater fish is a prize for anglers throughout the Midwest, especially in South Dakota where the walleye is the state fish [sources: Fielder, South Dakota].

Year after year, walleye return in schools to spawn in their chosen location, which is determined by following their homing instinct [source: CPI]. The walleye's repr­oductive ritual offers an angler a prime opportunity to snag them. More precisely, the golden moment comes right before the spawn, when the males gather in dense concentration by dams and at the mouths of inlets. They wait in these staging areas for females to join them when the water is just the right temperature [source: Pitlo].

So how can you locate these walleye convention centers, and when is the right time to strike? In this article, we'll delve into the when and where, and how to go about fishing for walleye during the spawning season. First we'll look at the factors that determine when the migration takes place.­

­As winter ends and the sun melts­ the ice that's accumulated on the lakes and streams, walleye leave the deep water -- where they've spent the fall and winter -- to begin their migratory journey. But it's important to know that walleye don't go by a typical calendar. A number of factors go into when they make their move, but the most important is water temperature.

When they sense the warming trend, the male walleye start on the journey first sometimes arriving at the staging site as much as a month in advance of the spawn itself [source: Shining Falls Lodge]. The females don't get there until the water has reached an ideal temperature to ensure the success of their reproductive activity. This is usually around 45 degrees Fahrenheit (7.2 degrees Celsius), give or take a few degrees [source: Pitlo].

The pace at which the sun warms the water determines the pace of the spawn. Similarly, shallow water warms faster than deep water, so spawning starts earlier and proceeds faster in streambeds than in lakes and reservoirs. Deep inland lakes can take a while to absorb sufficient sunlight to reach the trigger temperature. Offshore waters also warm more slowly.

A sudden cold snap or re-freeze can throw a wrench into the walleye plans, slowing down or postponing the spawn as the females hold on to their eggs. If the late freeze holds, they may even choose to reabsorb their eggs after depositing them on the shallow shoals [source: CPI]. In a normal year, spring warms up the aquatic environment fairly consistently and creates the ideal environment for fishing the spawn.

So now you know the basics for figuring out when to go walleye fishing. But where's the party?

Being the nocturnal creatures that they are, walleye do their spawning at night. They usually arrive at the spawn site just after dark and carry on until around midnight [source: McClelland]. Sound familiar?

­Walleye spawn occurs in shallow waters­ -- usually from 1 to 20 feet (0.3 to 6.1 meters) in depth and preferably rocky-bottomed areas. They use reefs, gravelly beachfronts and rip-rap used to protect the shoreline from erosion [source: Pitlo]. Rocky, uneven surfaces provide the gestating eggs some protection from predatory fish. The best spawn sites have moderate waves because wave action keeps the gestating eggs oxygenated, clean and free of silt buildup. If no suitable sites are available, walleye may use sandy beaches. Often you'll find them along the northern and eastern shores. They choose those directions to take in the southern and western sunshine in the afternoon, which are the warmest time of day [source: McClelland].

Some walleye spawn in lakes and reservoirs, while others spawn in streams and tributaries. The variation protects the entire school from being wiped out by natural disasters. The stream spawn comes sooner because of the warmer water; it may even begin before the ice is fully thawed [source: Shining Falls Lodge]. Stream-spawning walleye swim upstream as far as they can until they're blocked by a dam, gorge or other obstacle. That's where they congregate for the pre-spawn party [source: McClelland]. Alternately, they'll gather at the mouth of an inlet, and when the females make their appearance, they'll all travel up tributaries to spawn on banks and rocky places [source: Webb].

Lake-spawning walleye typically gather early at a place of sufficient depth and then dart into the shallow water to deposit their eggs [source: Webb].

Female walleye spend most of their time in deep waters -- where there is greater cover and food availability -- and appear just before the nocturnal spawn. Even then, they'll retreat to deeper water in the daytime. When their efforts are complete, they return to deep water to rest [sources: Shining Falls Lodge, Webb]. Stream-spawning walleye often head back to larger bodies of water after the spawn. Males tend to linger in the staging area for a few weeks, and then abandon it once the females have disappeared [source: Pitlo]. The spawn provides ample opportunity for the fisherman who understands walleye habits.

Now you've got all the background information. Read on to learn the tricks of the catch.

How Long Is the Spawn?

The spawning activity takes each walleye about four hours to complete. They may put in that time all at once or over successive days [source: McClelland].

Walleye Fishing During the Spawn

The pre-spawn and spawning periods can be an excellent walleye fishing time, although anglers should do their part t­o show restraint and not overfish the spawning females. Remind yourself that you would actually like to fish walleye again next year. Also, be sure to check with your local Department of Natural Resources for any fishing regulations.

So what's the easiest way to find the best staging and spawning sites? It's a good bet that the walleye are where they were last year and every year before that. Another good tip is to ask the locals. Once you've located the popular spawning spot, look around for the nearest flat-bottomed spot, and you'll likely find the staging area.

As we've seen, the timing of walleye activity depends on the water temperature. If you keep careful track of that, you'll have a good idea of where the fish are in their cycle. Also, mind the time of day. Walleye often have inactive periods during the day. Many of the seasoned walleye catchers go out around dusk -- to catch them in an active state -- and stay out until late.

As with most endeavors, your equipment can make or break you. A high-quality rod makes it easier to feel the bite, since not every hit is a thunderbolt. A 4- to 8-pound (1.8 to 3.6 kg) test line is recommended [source: Shining Falls Lodge]. Shallow diving crankbaits are useful along the shore [source: McClelland]. A variety of jigs -- vertical, pitching and trolling -- may work in different situations. Even different colored jigs can make a difference, depending on the level of water clarity or turbidity [source: Kavajecz].

Walleye are typically rather languid, so it's best to keep a slow pace. Drift along slowly with the current to catch river-spawning walleye. Or troll along the rip-rap shore, using a combination of longer and shorter rods to place lures at different depths. And use relatively large baits, such as large minnows [source: Pitlo].

Now that you've got the lay of the water, have fun chasing the walleye!

Slow and Easy Wins the Race

After spawning, walleye rest for anywhere from three days to two weeks. When they come back to life they're famished, and this makes the post-spawn another good time for walleye fishing both in shallow and deep waters [source: Shining Falls Lodge].