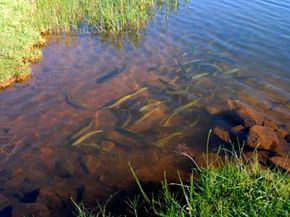 Your seventh grade science class is­ falling asleep at the wheel, so to speak. You try a different method of teaching your kids about animal reproduction from the textbook daily. You are at your wits' end; nothing seems to bring their heads up from their desks. A fellow teacher listens to your complaints and suggests a good, old fashioned field trip. Why not bring your class to the local river to watch the trout spawn?

Trout spawning is a very exciting moment in the lifecycle of the trout, and it's sure to breed some interest among your students. If they've never been to a river to watch fish, or even if they've gone with their family on yearly fishing trips, the tro­ut spawn is a perfect example of reproductive processes found in the natural world.

­Trout develop from egg to fry in the rivers, tributaries or sandbars where they were deposited by their parents. As fry, the developing trout must learn to survive without the protection of shelter and must rely on themselves for food. From the fry stage, which generally lasts about a year, trout develop into parr. As parr, the trout remain in fresh water and accrue parr bars, which are vertical grown marks that appear on both sides of the trout. As the parr develop into smolt, they leave streams and rivers they were born in to mature in more rugged water and to prepare for spawning [source: GoFishBC.com].

Read on to learn more about when trout spawn.

Once the smolt matures into an adult, it will spend a few years eating and growi­ng in order to get ready for spawning. Some species of trout migrate from streams to very large bodies of water, like lakes and even oceans, while others merely head upstream. Adult trout that have moved to larger bodies of water have access to much more food, and it's during this stage in the life cycle that most of their growth occurs.

As adult trout near spawning maturity, they begin to undergo changes in their color, behavior and anatomy. The trout's exterior shifts from a silvery color to bright red, pink and green. The closer to the spawning event, the easier it is to distinguish between the male and female trout. Male trout develop a hooked jaw called a kype, which elongates in size. The female, as the eggs grow in the abdomen, becomes more rounded and stout.

Different species of trout spawn during different times of the year. Depending on what trout species inhabit the areas near where you live, and what trout species you're interested in observing, you'll want to make sure that you coordinate your visit with the correct spawning season.

Rainbow trout spawn earlier in their lives than most other trout species (at roughly two years) and their spawning season occurs in the late spring and early summer as water temperatures rise. Brown trout spawn in the fall, from late September to early November, and are primarily active during the daytime. Lake trout, on the other hand, spawn at night during the autumn months.

You've got the time nailed down, but where's the best place to invade these spawning trout's privacy? Read on to find out.

The Myth of the Sand Trout

During an especially brutal drought in the Sonoran Desert of the American Southwest, it was rumored that a new species of trout had evolved to deal with the dire conditions. This new species, the sand trout, was reported to have developed lungs to breathe in the muddy water and to have their eyes raised on stalks to see above the sandy surface. Sounds fishy [source: Grames].

As spawning begins, the female trout will scout out a shallow, oxygen-rich lake or river bed to deposit its eggs into. The female will then carve out a small trench called a redd by scooping out the gravel and sand with its tail. Once the redd is complete, the female will deposit her eggs and wait for a male to fertilize them with his sperm. Males will often fight with each other using their recently developed kypes to battle for the best territory on the spawning grounds. Upon completion of spawning, the female will cover the red with loose gravel and sand as it swims away, providing the future hatchlings with shelter. Unlike salmon, trout don't die after spawning and can participate in spawning multiple times in the course of their life [source: USDA Forest Service].

During a spawning season, a single female rainbow trout can spawn 200 to 8,000 eggs. Of the eggs that are fertilized, very few will survive to become mature adults, having fallen prey to predators such as large insects, amphibians, water pollution and hungry fish, even including mature trout.

Swim over to next page to read about how an angler can fish for trout during the spawning season.

When in Doubt, Stock Up on Trout

Fish hatcheries and trout farms across the country keep anglers happy by providing a constant source of fresh trout to lakes and rivers where the spawning process can't keep up with fishing demands. If you're curious, you can make a personal visit to a hatchery, where you can get a tour and an opportunity to fish in bustling trout waters.

Trout Fishing During the Spawn

Fly fishing is another popular method of fishing used during spawning season. This method is practiced in rivers and employs an artificial lure to get the fish to bite. The artificial lure in fly fishing resembles an insect or other prey, often a fly, which is where the method gets its name.

During the spawn, the most efficient fishing practices are performed from the shore or in the river or lake itself. You will probably want to stray from using a large boat, especially one with a motor. Additionally, you will want to be on the lookout for some of the trout's other predators during the spawning season, which include low-flying bird of prey, other large fish and water-dwelling animals like the otter.

Now that you've got the know-how, you can visit some spawning trout for an educational lesson -- or just some good fishing.­

Trout Tunes and Plate Your Catch

If you're not fishing in a catch and release area and decide to keep what you catch, trout are a popular fish to put on a plate. Rainbow trout and brown trout are the most widely consumed species, but just about all trout species are edible and delectable. 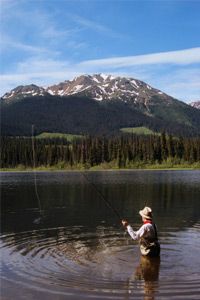 Up Next
How Lake Trout Fishing Works
Explore More 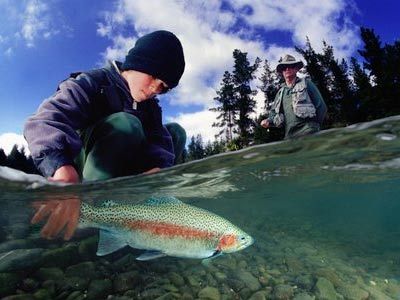 You May Like
How River Trout Fishing Works
Explore More 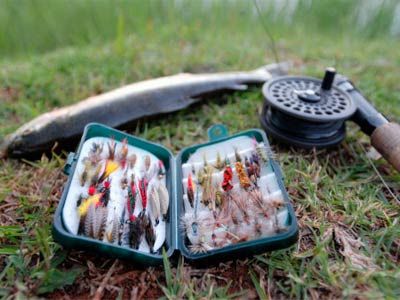