As temperatures warm up and salmon move into their summer waters, fishing techniqu­es and depths change to reflect this. On Lake Michigan, the summer run begins in June or July, and anglers utilize downriggers as a means for bagging Chinooks. Attached to the side of a boat, downriggers are mechanical "arms" that extend the line far away from the boat and take it down deep by means of a 10-pound (4.5 kilogram) lead ball. A plastic clip attachment secures the weight to the line. Downriggers are beneficial because they allow anglers to fish in the 80 to 120 foot (24 to 36.5 meter) range. Of course, if the weight doesn't release as it's supposed to, hauling in 20 pounds (9 kilograms) of fighting silver bullet can be a chore. Lakes Michigan, Huron and Erie are guarantees for salmon. One of your best bets is Lake Michigan's Wisconsin side, which offers stellar early morning fishing in June at Algoma.

Though completely landlocked, South Dakota offers an astonishing number of salmon to the avid fisherman with downriggers. Pierre, the state's capital city, is home to the Oahe dam. Located on the Missouri river, this spot begins its salmon run in mid-to-late June, and early morning (think 6 a.m.) anglers will be rewarded for fishing the rocks alongside the upper face of the dam. All Chinooks begin life at Whitlock Bay's spawning station, making them an entirely landlocked fish [source: South Dakota Game, Fish, and Parks].

If you're taking a trip to watch the leaves change colors and take advantage of the cool, crisp fall air, why not take your salmon rod with you? Read on to find the best autumn locations.

Something Smells Fishery Around Here and What's in a Name?

With all this talk of "fisheries," let's take a look at what a fishery actually does. As salmon fishing becomes increasingly popular and natural numbers decline, fisheries and hatcheries are involved in stripping eggs from salmon to ensure future generations of fish and continued conservation efforts for their habitats. In 1872, California's McCloud River became home to the first hatchery, known as Livingston Stone. The hatchery closed in 1937, and is now entirely covered by Lake Shasta [source: U.S. Fish and Wildlife Service]. To see a live example of a working fishery, head to Kewuanee, Wis., to take a tour of the C.D. Besadny Anadromous Fish Facility and watch salmon maneuver the ladders from an underground room.

Salmo, a Latin word meaning "to leap," gives these fish their name. Although all salmon are anadromous, hatching in freshwater and maturing in the ocean, they return to their home waters to spawn. Both Atlantic and Pacific Salmon share this life cycle, and it is the migratory pattern that ultimately brings them to you and your table. 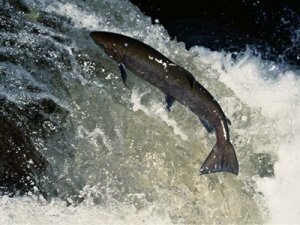 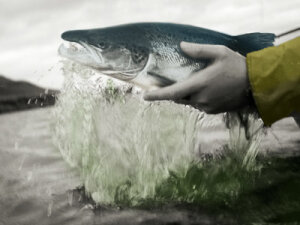 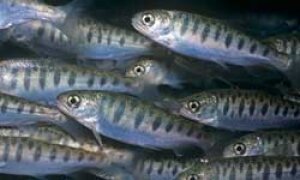