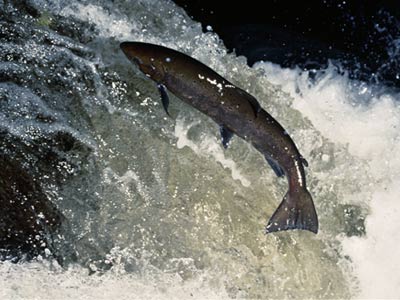 Salmon are native to the cooler regions of the Northern Hemisphere.
Laurie Campbell/Stone/Getty Images

How long does it take you to get to y­our favorite bagel place, the one that's always stocked with lox? Too long, right? And the traffic is bad, and it seems like there are always so many obstacles. Next time you feel like complaining because you have to travel to get some tasty lox or a succulent salmon dinner, consider the journey the salmon that became your lunch has made in its short life. Some salmon travel up to 3,000 miles (4,828 kilometers) on their quest to spawn in natal waters.

That said, if you're up for a road trip to bag a salmon all your own, chances are you're probably closer to one than you ever imagined. In the following article, you will learn where to find salmon throughout the seasons. This article will introduce you to seasonal salmon-friendly destinations based on the migratory patterns of the Pacific salmon, from Alaska and the Pacific Ocean to the East Coast and a few watering holes in between.

Both Atlantic and Pacific salmon relocate in much the same way, through a complex navigation system humans don't really understand. The major difference between the two is that an Atlantic salmon may live to spawn again while Pacific salmon spawn once and die [source: University of Delaware]. There are five species within the Pacific and North American salmon family: Chinook, oho, sockeye, chum and pink. Two additional species of Pacific Salmo­n can be found in Asia. Now let's look at salmon season basics before diving into some hot salmon locations.

­Salmon season is determined by the local game and parks commission. The season length depends on the amount of salmon available in the region. Because of recent scarcity, California did not open a 2008 salmon season at all [source: California Dept. of Fish and Game]. Different salmon species and sizes are caught during the different seasons, beginning for most waters in March or April with the Spring Chinook run.

Can't wait to get out after a long, cold winter? Read on to find the best spring salmon locations.

If you're worried that being landlocked means salmon are out of your league, you haven't fished in New England. Find yourself among lush scenery and truly wild salmon at the West Branch Penobscot River, which rates as one of Fish and G­ame magazine's top 5 spring salmon waters [source: New England Game & Fish]. Moving further inland, from April to May, Lakes Michigan and Huron offer a fine, if chilly, spring salmon run. When the ice breaks and temperatures are still low, fishing can require patience, but with the right location and equipment, you can find yourself fighting a strong Chinook at these hotpots.

Besides the Great Lakes, Idaho offers a bounty of options along the Snake River streams and dams. Idaho Fish and Game commissioners opened the spring 2008 season in April, in anticipation of around 100,000 Chinook salmon crossing the Lower Granite Dam throughout the season. Snake River and other dams opened at this time as well. Anglers from Utah, Idaho and Montana make the trek to the Clearwater River Salmon Fishery each year to try their luck. Ellis, Idaho, is home to the Pahsimeroi Fish Hatchery, which also releases and monitors young salmon each year. Continuing westward, Cowlitz River, Wash., begins its run in March.

Want to wait til the weather's a bit more hospitable? Continue reading to find some good summer salmon spots.

While salmon rods, reels and line have to be heftier than that used for fish like perch, you don't want gear that's going to wear you out before you can haul in your catch. In the spring, Lake Michigan anglers rely on flies and flashers for their fishing adventures, while other seasons require different tackle. Flashers, which are brightly colored rectangular plates, attach to your line and reflect the sun's light down in the watery depths. They vary in size and are available at any sporting goods store. Clipped onto your line a few inches before the fly, these vibrant accessories help punch up the look and movement of the lure itself.

As temperatures warm up and salmon move into their summer waters, fishing techniqu­es and depths change to reflect this. On Lake Michigan, the summer run begins in June or July, and anglers utilize downriggers as a means for bagging Chinooks. Attached to the side of a boat, downriggers are mechanical "arms" that extend the line far away from the boat and take it down deep by means of a 10-pound (4.5 kilogram) lead ball. A plastic clip attachment secures the weight to the line. Downriggers are beneficial because they allow anglers to fish in the 80 to 120 foot (24 to 36.5 meter) range. Of course, if the weight doesn't release as it's supposed to, hauling in 20 pounds (9 kilograms) of fighting silver bullet can be a chore. Lakes Michigan, Huron and Erie are guarantees for salmon. One of your best bets is Lake Michigan's Wisconsin side, which offers stellar early morning fishing in June at Algoma.

Though completely landlocked, South Dakota offers an astonishing number of salmon to the avid fisherman with downriggers. Pierre, the state's capital city, is home to the Oahe dam. Located on the Missouri river, this spot begins its salmon run in mid-to-late June, and early morning (think 6 a.m.) anglers will be rewarded for fishing the rocks alongside the upper face of the dam. All Chinooks begin life at Whitlock Bay's spawning station, making them an entirely landlocked fish [source: South Dakota Game, Fish, and Parks].

If you're taking a trip to watch the leaves change colors and take advantage of the cool, crisp fall air, why not take your salmon rod with you? Read on to find the best autumn locations.

Something Smells Fishery Around Here and What's in a Name?

With all this talk of "fisheries," let's take a look at what a fishery actually does. As salmon fishing becomes increasingly popular and natural numbers decline, fisheries and hatcheries are involved in stripping eggs from salmon to ensure future generations of fish and continued conservation efforts for their habitats. In 1872, California's McCloud River became home to the first hatchery, known as Livingston Stone. The hatchery closed in 1937, and is now entirely covered by Lake Shasta [source: U.S. Fish and Wildlife Service]. To see a live example of a working fishery, head to Kewuanee, Wis., to take a tour of the C.D. Besadny Anadromous Fish Facility and watch salmon maneuver the ladders from an underground room.

Salmo, a Latin word meaning "to leap," gives these fish their name. Although all salmon are anadromous, hatching in freshwater and maturing in the ocean, they return to their home waters to spawn. Both Atlantic and Pacific Salmon share this life cycle, and it is the migratory pattern that ultimately brings them to you and your table.

As leaves change from green and bright to red and subtle, thes­e sleek fish also morph from flashy silvers to deep reds, greens and steely grays. Salmon fishing in the fall brings cooler temperatures, different techniques and new kinds of fish to the table, with sockeye, coho and chum making their initial seasonal appearances all over Washington. Although the sockeye has been on the endangered species list since the 1990s, the glossy fish goes red and green (on the outside) in the fall, and is one of the most desired fillets available [source: Stahl]. Head to the Cowlitz River in Oregon to meet up with the red-fleshed (but silver-bodied) coho, which made their best showing in years in the fall of 2008 [source: Brown]. Known for their rich, red flesh, coho are one of the best eating of the Pacific Salmon and are slightly smaller than the Chinook.

After boating your limit, head to Puget Sound, where anglers have been hooking into chum since the 1980s, when record numbers were released by local fisheries. Distinguished from the Chinook or coho by its less rich and more pink flesh, the chum salmon offers a mild flavor and is perhaps an easier catch because of its smaller size.

And for those able to leave the lower 48, Alaska's a sure bet for salmon year round. Hop a plane and fly to Valdez, which boasts an annual salmon derby for men, women, and kids in the last days of summer or early fall.

If you're interested in Alaska, you're probably brave enough to read on to the next page to find out the best winter salmon locations.­

For those who fish salmon, Alaska has become something of a rite of passage. It's true that fishing among bald eagles, bear and moose can be a scene unto itself, but in addition to the natural wildlife, Alaska boasts salmon numbers in the thousands. Don't let the prospect of planning and booking a fishing trip to Alaska overwhelm you. Field and Stream magazine Editor Jay Cassell offers some simple tips on what you'll need:

Cassell notes that most lodges offer tackle and can tell you what's hot in the area, but other supplies may not be available.

From coast to coast, we've seen how salmon are as convenient as your local freezer section, but if you can handle putting on a couple of layers, why not venture ou­t­ into the winter chill and find your own fish in the wild? Head to upstate New York to check out some fishing along -- where else? -- the Salmon River. Here, you can fish for large coho salmon alongside fans of steelhead trout, a migratory species.

Heading out west to Montana, make a stop in Eureka and spend some time on the Tobacco River for the winter Salmon Festival, a two-day event that offers everything from fishing (of course) to fun and games for the kids. If you're up for a challenge, go further northwest to explore Homer, Alaska, where guides are willing to help you hook your dream fish among the glacial waters.

Now no matter what the season you get a hankering for some serious salmon fishing, you can pack up and head throughout the 50 states to find a salmon to suit your taste.

What do you mean it's not in season?

For most things we eat, "seasons" are relative. Mangos in Maine in October? No problem. January squash in northern Montana? Sure thing. As food travels greater and greater distances to get to our tables, what does it mean in terms of quality? With salmon, it used to mean that fish had to be frozen in order to reach inland grocers and delis, but with the advent of commercial fishing techniques and a high demand for this rich, red fish, salmon has become just another commodity with a year-round season [source: Gugino].