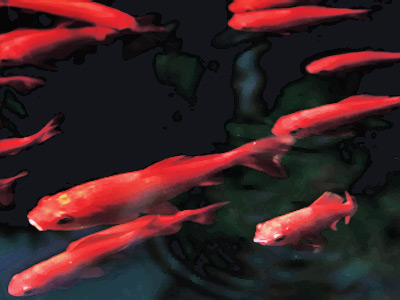 Open water. Warm­ seas. And a three-foot, 40-pound fish putting up a heck of a fight on the end of your line. Does it get any better?

Many fishermen find redfish (also called red drum) appealing, not just because of their flavor but also because of their size and their eagerness to fight. Fishing for redfish is bound to be exciting and memorable.

Redfish move about quite a bit. In the course of the year, you might be able to catch redfish­ in brackish water and salt water, sounds and inlets, marshes, rivers, creeks, flats and surf. But the main event is the redfish spawn, when redfish by the thousands gather and school offshore.

­Water in redfish spawning grounds is typically more than 50 feet deep, but redfish come right up to the surface for the actual spawning. And you'll know it when you see it. Being in the midst of the redfish spawn can be an overwhelming experience. A great copper tide surrounds the boat. You can hear, perhaps even feel, the characteristic drumming sound that gives the fish its folk name, red drum. The schools are so large that they're visible from airplanes.

Read on to learn about when and where redfish spawn, as well as how to fish for them.

When Do Redfish Spawn?

The timing of the redfish spawn depends on numerous factors. Location plays a role,­ as it does in all redfish fishing. Mature redfish follow baitfish populations up and down the Atlantic coast and through the Gulf of Mexico.

Much of the movement of fish populations is due to water temperature. In spring, schools of baitfish move up the Atlantic coast, and the redfish follow, eating all the way.

In the Texas part of the Gulf, the redfish spawn takes place in late winter or early spring. Farther north, the spawn might happen in August or September -- hurricane season. In the Indian River lagoon in Florida -- one of the few inshore spawning grounds -- the spawn typically happens in late fall.

Many environmental factors affect not just the timing but also the size of the spawn. Factors to consider include

The availability of food for the larvae and juvenile fish, predator populations, river discharge -- which can be affected by recent rain -- and water salinity also make an impact. [Source: Louisiana Fisheries]

How Big Is This Year's Spawn?

The same environmental factors that affect the timing of the spawn can also affect its size. But the major factor in the size of the spawn is the number of adult fish that are able to reproduce -- in other words, the size of the past three year-classes. The National Marine Fisheries Service has set goals for this species; when the species is reproducing at the goal rate, its population will have stabilized somewhat. [Source: Louisiana Fisheries]

Where Do Redfish Spawn?

Usually, redfish spawn along the sou­theast Atlantic coast and Gulf Coast of the United States. You can find them from Virginia, south to the tip of Florida, and around the Gulf, all the way down to Texas.

Be aware that many conservation efforts are in place, and each state has a different program -- which means each state has different regulations on how many fish you can keep, as well as a minimum and maximum size for those fish. In Louisiana, for example, you can't keep a redfish more than 27 inches long; at this size, it's probably about three or four years old, and it has reached maturity, so it has had a chance to spawn before you catch it. Louisiana also has special saltwater angling license regulations pertaining to redfish. The minimum size requirement helps ensure that more fish reach maturity.

Redfish typically spawn in warm, deep waters, on incoming tides. They follow the schools of baitfish, such as menhaden shad (a.k.a. pogie), up and down the coast. The adult fish -- called bulls, regardless of their gender -- school when the water gets warm. They like to hang out around underwater structures, like reefs or submerged wrecks. Redfish are predators, and these underwater structures interfere with the current, allowing the redfish to surprise their prey.

Before you set sail, be aware that many guides now avoid fishing for redfish during the span, in order to give the population a chance to rebuild itself. Other anglers practice a strict catch-and-release policy. Size regulations mean you'll probably be doing quite a bit of catch-and-release no matter what. But that has special implications for redfish. Read on to learn more.

Where Did All the Redfish Go?

Redfish populations plummeted in the 1980s. Though some people blame the blackened redfish fad, many factors were at work, including heavy recreational and commercial fishing. Because spawns were visible from the air, commercial fishers used spotter planes to find the schools. They netted hundreds, even thousands, of fish at a time. Not only were the sheer numbers calamitous, but the redfish -- having gathered to spawn -- in many cases didn't actually have the chance to reproduce before they were caught.

Redfish Fishing During the Spawn

Redfish are natural fighters know to battle in excess of 20 minutes­. [Source: Miami Herald] That makes for exciting fishing, but demands vigilance for the fisherman. Why? By the time you finally reel in the redfish, it's exhausted. Lactic acid -- the same thing that makes your legs burn after a sprint -- has built up in its muscles. You might need to revive it before you let it go; otherwise it might not have the energy to swim away, turning your catch-and-release into a catch-and-accidentally-kill.

Another problem with catching and releasing redfish during the spawn is that these fish usually hang out in shallow waters. During the spawn, however, they're literally out of their depth. They may have dived deeper than they're used to. That wouldn't be an issue, except their air bladders are poorly adapted for depth. If you reel in a redfish from deeper currents, it may arrive at the surface with its air bladder prolapsed -- protruding from the mouth. You'll have to get the bladder back inside before you release the fish, meaning you must deflate it. Some fishermen carry a small ice pick or similar tool to give the air bladder a small puncture.

Always watch a released redfish closely. If it doesn't swim away energetically, get it back in the boat and work to revive it.

What about equipment? Fluorocarbon reels work well. Some anglers recommend 20-pound test line; others prefer 40-pound line. You can use light tackle, but remember how much these fish fight. Spinning or casting tackles are a good idea. So is a heavy-duty hook.

One last note -- if you're fishing with friends, you might want to take turns. Like people, redfish turn "dumb and silly" when they're mating. [Source: Miami Herald] If you have multiple lines hanging off the boat, you might catch multiple fish at once, and they've been known to fight so hard they get the lines tangled under the boat -- even in the propellers.

Cajun cuisine soared to national popularity in the 1980s. Many people now blame the blackened redfish craze for the drop in redfish populations, though in fact redfish were on the wane well before New Orleans chefs created this signature dish. If you're looking for a tasty way to cook up your catch, you can try it. Make a rub of cayenne pepper, black pepper, lemon pepper, garlic powder and salt; coat the fish in melted butter and then the rub; sear the fish on high heat until it's slightly blackened on each side. Depending on the chef, the amount and combination of ingredients varies somewhat, of course. You can find one version here.

Redfish will go after a variety of bait, living and dead, artificial and real. You'll probably find success with live bait such as pogies, mud minnows, shrimp or small blue crabs. Fresh mullet chunks often work. You might also try a small or medium topwater plug.