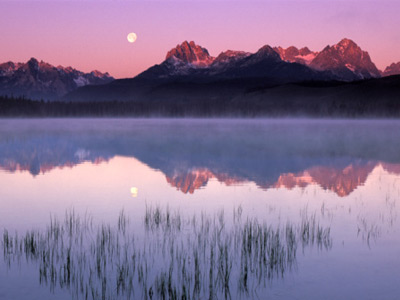 If you're hankering for a big­ fish with a big fight, you should consider fishing for redfish. Wondering where to find them? It's really a matter of figuring out what areas offer the best redfish fishing in each season. If you're willing to travel along the Atlantic coast and to the Gulf of Mexico, you can experience great redfish adventures throughout the entire year.

Redfish are also known as rat reds, bull reds and red drum. Redfish have a large black spot on the base of their tails, and their colors range from black to copper to silver. Redfish grow up ­to 11 inches the first year, and reach up to 24 inches by their third year, when they are considered mature.

­Until they reach around seven years of age, young reds are found in coastal marshes where they hatch. Then, they move offshore and only head back into marshes and ponds during the winter months. Redfish live in saltwater, but can also live in freshwater. You can catch redfish using natural baits like shrimp, mullet, and blue crab, as well as artificial baits like shallow spoons, plugs, worms and jigs. [source: Florida Sportsman]

In this article, we'll take you through each season of the year to let you know exactly where to go fishing for redfish. Grab your gear, and let's get started.

­During the spring, redfish hea­d up the Atlantic, populating the inlets up and down the East coast. It isn't hard to find huge schools making their way out into the deeper waters. Though redfish are found nearly everywhere along the East coast, there are a few places that are noted for record catches and high populations. For example, Hatteras Island, False Point, Ocracoke Island and Cape Point in the Chesapeake Bay kick out big reds in the spring (and the rest of the year) that can be taken while surf fishing right from the shore. [source: Malat]

Peaking in April and May, North Carolina's Outer Banks is a favorite hot spot that can boast some of the biggest trophies ever. April brings many of the redfish that were wintering in North Carolina back to Virginia Beach. From May through the month of July, the Chesapeake Bay kicks out record numbers of trophy redfish, especially during evening fishing from the warm shallows to the shoals along the mouth of the Bay. [source: Yokam] Charleston, S.C. begins building redfish numbers in the spring, though they don't start schooling until summer. [source: Yokam] Redfish numbers in Florida's St. Johns River are growing, and catching prime reds along the shallow grass beds is becoming common.

It's not just the temperature that's hot. Summer redfish locations get hotter and hotter each year. Read on to learn about the hot spots for summer redfish fishing.

In the spring, all across the Gulf and Atlantic regions, redfish are leaving their winter habitats and moving back into the deeper waters. You really can't go wrong no matter which area you choose to fish, as long as you don't stay in the fall and winter habitats. Whether you're fishing from the shore or from a boat, you will need to move farther out to catch the hungry bulls.

Florida is popular year-round for redfish, but they don't st­ay in one area. As the seasons change, the reds move. From early spring through late fall, large schools of redfish invade the local grass flats of St. Petersburg/Tampa Bay (Gulf Coast). During the high tide, redfish cruise mangrove shorelines, oyster beds and grass flats foraging for crabs, shrimp and baitfish.

The best months to hit the south Florida flats, backcountry and Biscayne Bay for redfish are May through August. In this climate, reds are around during other months of the year, but these months tend to produce the best action. [source: Hale]

Other prime Florida locations for redfish anglers include:

The coast of South Carolina shouldn't be ignored during the summer months. Fishing salt marshes, creek mouths and near oyster beds is popular, as the redfish are feeding on the baitfish that are being pulled out by the tide. [source: Rhodes]

Murrells Inlet, near Myrtle Beach, S.C. produced a record 75-pound red in 1965, and is still a popular near-shore and inlet-fishing hotspot.

Cameron Parish, La. produces monster bulls that can be taken right from the shoreline. While the redfish chase mullets to the shoreline, anglers get a chance to snag 50-pound reds in just a few feet of water. [source: Felsher]

Where's the best fall redfish location in the United States? Find out in the next section.

Remember to Move Around

In the article, "Catch Carolina's Summer Redfish Now!" Walt Rhodes of South Carolina Game & Fish explains, "Looking for redfish in locations that commonly hold the fish during fall and winter is a common mistake made by summertime anglers." Locations that redfish favor in fall and winter can be very different from their favored summertime hideouts. In summer months, redfish are found in deeper waters, while the winter months force them inland, into the shallows. [source: Rhodes]

Thou­gh the Georgia coast isn't the only place to fish for redfish in the fall, it does offer up large schools populated with 27-­ to 30-inch redfish. Inshore hot spots include the St. Marys area, specifically the Spartina grass areas of Crab Island and around Kings Bay. [source: Dean]

The Golden Isles, part of Georgia's Barrier Islands, is a great fall redfish location. Fishing breakers off the barrier island shoals is good for bull redfish, while moving to shallow estuaries during the afternoon will garner smaller but tastier reds. [source: Dallmier]

Great redfish locations can be found in both the Gulf and the Atlantic during the fall season. Some of the best spots include:

Think winter means the fishing blues? No way. Some of the best winter redfish locations are scattered across the Gulf Coast, just waiting for you. Check out the next page to find your best winter getaway.

Ask the Pros and Shhh! Be Very Quiet

Once you have decided on an area, speaking with local guides or chartering a trip might be your best bet. Redfish move to different waters during the changing seasons, so you will need to adjust your approach, bait and tactics from summer to winter.

As big as they may be, redfish scare easy, especially in the fall when they are in shallow waters. Turn the trolling motor off and move in with push poles when you can.

­Winter reds are found in­shore in water less than four feet deep. Sometimes they habitat waters so shallow that their tail fins are visible. They prefer soft mud and vegetation, as well as oyster, clam and mussel reefs. Inshore fishing spots include jetties, coves, points and pilings, where the reds can hide and munch on baitfish and crustaceans.

For winter bulls (adult redfish), your best bet will be the Gulf Coast waters off Florida, but each location listed below sports high populations of redfish. Keep in mind that winter in the Gulf Shore starts in late January and goes through early March. A few of the best winter redfish locations include:

Staying north of the Florida Keys offers your best bet for jumbo reds. They like the shallow flats of the inshore waters. The waters off Cape Canaveral get busy due to the high populations of redfish all year round. [source: Sargeant]