Browse the article How the Pike Spawn Works 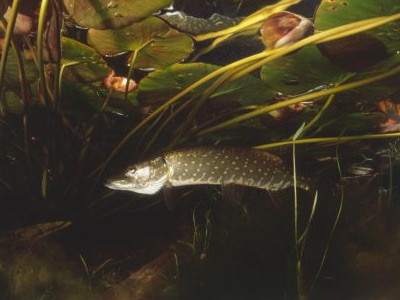 Dark underwater shot of a drifting pike fish close to the surface where the bottom of liilypads can be seen.
Kevin Cullimore/Dorling Kindersley/Getty Images

Every species needs to reproduce, right?­­ Pike are no exception. And some of the best fishing can happen during this annual spring ritual. Luckily, all you need is your tackle box, pole and sense of adventure. They'll do all the work, and you can reap the rewards.

During pre-spawn, pike migrate to their favorite spawning waters. Once there, male and female pike swim side by side. As they coast along, the males entice females to release their eggs by nudging the females' abdomens with their tails. The males release clouds of seminal fluid called milt all around the females, increasing chances of fertilization. Pike can lay between 25,000 to 225,000 eggs­ [source: Bucher.] That's a lot of eggs -- and it means a lot of eager spawners for you to catch.

­Eggs attach to vegetation and, depending on water temperature, can take anywhere from two to four weeks to hatch. Females do not care for their young and leave the area soon after depositing their eggs. Young pike feed on their own yolk sacs for their first week and then move onto eating small plants and animals while they develop scales and fins. Growth rates vary depending on location and food sources.

After spawning, females begin feasting. They will eat any fish that fits in their mouths, including their male counterparts [source: Pikezander]. Because they are so hungry, fishing right before and after the spawn will help you to snag the big females. In this article, we'll discuss when and where pike spawn, and techniques for fishing during this exciting time.­

When pike spawn they are more interested in the business at hand than with eati­ng. Pre-spawn, just before and during ice thaw in early spring, male and female pike eat feverishly in preparation. If you want to fish during the pre-spawn, ask local guides and fisherman to point you in the right direction. Be sure to check with your local fishing agency to ensure pre-spawn pike fishing is legal in your state.

Generally, pike become sexually active between their second and third years, but size matters more in determining sexual maturity than age. Bigger females will release more eggs and attract more males [source: Pikezander]. Once they are all grown up, they are ready to join their peers at the spawning grounds.

Spawning times are not set in stone and are determined by water temperature. Spawning takes place when the water's temperature reaches at least 40 degrees F. It can begin anytime starting in late February and continue until May or June, depending on the location. In the northern United States, pike will most likely be spawning in mid-April.

Males move into spawning grounds a couple of weeks before the females and hang around for a few weeks after spawning is complete, averaging approximately a one-month residence. You can hone your pike fishing techniques by practicing on the males. Post-spawn females don't stick around, heading back to their normal waters shortly after dropping their eggs. You can expect females to be actively spawning for roughly 10 days before they go back to their regular lifestyles.

Now you know when the pike spawn is happening, but where are they? Read on to learn about prime pike spawn locations.

Newly hatched pike have a sticky patch on their heads. They use this patch to attach to vegetation while they are resting and growing between feedings. They can attach and detach themselves much like a self-stick note. As they age and become more self-reliant, the patch slowly disappears [source: Moen].

­Because pike are found in various locations across the globe, you would think pike-spawnin­g locations would be radically different in each area. It's not. It seems that no matter where they are, pike have basically the same spawning tastes.

Rivers tend to produce large pike due to the amount of food sources, such as shad. When rivers swell during the spring thaw, they produce feeding and breeding grounds favored by the northern pike. The shallow back bays of large lakes are another favorite spawning area because of the natural vegetation and abundant supply of pan fish, bluegill and crappy, which pike find hard to resist [source: Vick]. Pike tend to be one of the easiest fish to catch, so your local fishing agency or well-known fisherman will be able to point you in the right direction.

Now that you know where to locate pike during the spawn, let's talk about what you really want to know -- how to fish for spawning pike.

When pike spawn in flood plains, they decrease the chances of survival for their young. Because they spawn in shallow water to begin with, any drop in water level can literally leave the young high, dry and stranded. And, even though female pike release thousands -- if not hundreds of thousands of eggs -- the majority of the eggs will be destroyed by other fish, fungus and invertebrates [source: Northern]. In Michigan, one particular habitat estimated a 99.8 percent mortality rate [source: PikeOnTheFly].

Pike Fishing During the Spawn

Every fisherman has a favorite rod. Recommended rods for pike fishing include­ the longer European-style rods that have baitcast or spinning reels. Pike can also be caught using a fly rod, but fly fishing isn't recommended as the primary way to reel in a pike if you're unfamiliar with the method. Pike are gnarly fish, and they can bring you right into the water if you don't know what you're doing.

When fishing during the spawn, location helps just as much as equipment. Check with your local fishing agency to locate rivers or lakes that include these types of natural pike baitfish:

Pike can be fished during the spawn with live bait or artificial bait. Since most states have regulations or bans regarding live bait, check before you toss any old bait into your favorite water location. Some of the most popular baits and lures include:

Pike are big ole fish with big appetites. And, as the saying goes, their eyes are usually larger than their stomachs. Pike attack fish in the midsection and then spit the fish back out to take it down head-first. If the fish is too large to fit all the way into the pike, the pike will swim around with half a fish hanging out while it waits for part of its prey to digest -- then it will finish it off. This is not recommended at human dinner tables [source: NYSDEP].