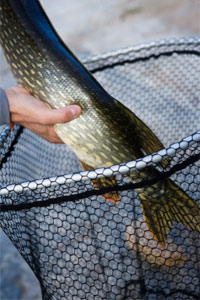 It is a beautiful spring day, so you've taken your boat out on the lake to fish. You find a pe­aceful, protected bay, the perfect spot to settle in for an afternoon o­f fishing. You cast your line and slowly begin to reel the lure back in. Suddenly, your line is hit. Hard. Your adrenaline rushes at the first catch of the season. You fight what must be a big one and finally get it into the boat. But when you take a look, you notice something. You've caught a pike, which isn't the fish you were expecting at all.

Pike are holarctic fish -- meaning they are found all around the globe in the freshwater habitats of most northern and arctic regions. In North America, they can be found in the lakes and rivers of the northern U.S. and throughout Canada. In the U.S., they are sometimes called northern pike, or simply a "northern." They're larg­e, predatory, freshwater fish that sit atop their ecological food chain. They feed on almost anything swimming or thrown in their direction, particularly in the spring. Because of their insatiable appetite, pike grow to be large fish. It is not uncommon to find pike that weigh 10 pounds (4.5 kilograms) or more in larger lakes and rivers. Needless to say, pike make a great addition to any trophy wall, dinner platter or photo collection.

­You might think pike are easy fish to catch since so many fishermen unintentionally reel them in. While randomly casting might garner a pike every so often, the truth is fishing for pike requires good technique. Read on to learn why live bait, spoons and fly fishing are the top three techniques -- and how they can virtually guarantee a hit.

Using live bait is one of the best ways to snag a pike. Live bait comes in many shapes and sizes, from small insects to small fish. There is a simple rule of thumb when choosing bait for pike: Know the size of pike you're fishing for, and mat­ch the size of the bait accordingly.

­A great way to bait a hook with live bait is pretty straightforward. Attach two hooks to one leader -- an additional line or wire tied to the end of the fishing line to increase strength [source: Take Me Fishing]. Thread one hook through the midsection and one near the head of the bait. Pike often strike prey around the middle, carry it away, and then spit it out to eat it head-first. Often, waiting to feel the line go in a second time before pulling to set it will ensure hooking the fish.

Often, the best live bait is actually dead. Pike are not only predators but scavengers as well. They often feed on dead animals on the bottom of the lake or river. Attach dead bait (for instance, a dead minnow) to a hook, cast and let it fall to the bottom. If you know pike are in the area, chances are you'll get a hit.

If live bait makes you squeamish, read on to learn about spoon fishing.

Law of the Land... and Water

Before fishing with live bait, be sure to know the fishing laws and restrictions in your state or province. It is illegal in some places to fish with living bait. These laws are in place to protect local fish from invasive species. Check with your local department of natural resources (DNR) to make sure you're being a law-abiding angler.

Spoon fishing is an extremely effective pike fishing method. A spoon lure is a piece of flat, curved metal that quite literally resembles the head of a spoon with a hook attached to its base. The spoon shape of the lure causes it to wobble in the wa­ter as it is pulled. This simulates the movement of the pike's prey and is often irresistible to the fish.

Cast your spoon just beyond your target area. Wait a moment until the ripples from its entry into the water dissipate before beginning to reel in the spoon. Regardless of technique, this is a great practice to get in the habit of because ripples can spook or distract pike. Vary the speed at which you reel in or troll the spoon because speed affects how much it will wobble.

Now it's time to get out of the boat, hike up your rubber pants and get in the water. Read on to learn about fly fishing.

Knowing where to look for pike is the first step to catching them. Pike are found in shallow areas of lakes and rivers in spring and fall and in slightly deeper, cooler waters in the summer. They are particularly fond of calm, highly vegetated areas that provide an abundant food supply and an ideal place for spawning.

Fly fishing for pike requires a little ­more practice and skill than either live bait or spoon fishing­, but the time invested in learning the technique can pay off in big catches.

Instead of casting a lure and reeling it back in, with fly fishing you cast a fly (a brightly colored, lightweight lure that floats on the top of the water. Then you continuously raise and lower the fly on and off the water in a casting technique called stripping.

­When fishing for pike, use a forward-floating, heavier (8- or 9-pound) weight line and rod and a large fly. [sources: Akl, Macnair] Remember to situate yourself far enough from your target area to easily cast while not spooking the fish with your presence. Pike are known to strike flies at the last second, so do not be surprised to see the fish break the surface of the water going after your lure [source: Akl].

Fly fishing is a perfect technique for catching pike for a number of reasons:

A Fishy Tale and Handle with Care

Everyone loves a good fish story. Legend has it that in 1230 Emperor Frederick the Second attached a copper, engraved ring on a pike and put it in a lake at castle Lautern in Germany. In 1497, the fish was hauled in still wearing the tag and weighing 550 pounds at 17 feet long. Hmmm. A pike living for over 200 years? No -- it was a hoax. But it still makes a really great fish tale [source: National History Museum].

Pike should be handled with extreme caution when out of the water. The pike's frame cannot actually support its own massive weight without the buoyancy of water. Try to keep pike in the water when removing hooks. Also remember to watch your fingers because pike have extremely sharp teeth and a heck of a bite.