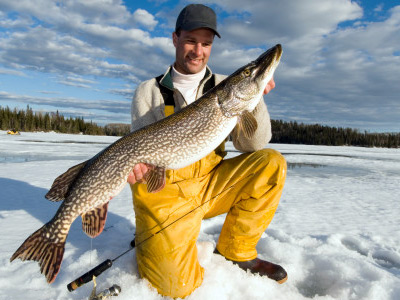 Whether holding a pike to remov­e the hook or take a picture -- or whatever reason has you holding a live fish, there is one tried and true grip among anglers. After all, when you're dealing with a fish that's capable of growing beyond three feet in length and weighing more than 20 pounds, you should probably know what you're doing.

After getti­ng your pike out of the water, lay it flat on an unhooking mat or a piece of carpet. With your fingers straight, insert two of your fingertips under each of the gill covers carefully. Let them slide up toward the tip of the pike by following the triangular shape of the pike's gill and jaw structure.

­Avoid touching the gill rakers, which are visibly red, as they can break your skin. You should also be careful not to put your fingers in too far past their tips, because the pike's jaw is very big and you don't want to catch your fingers in its teeth. Once you have successfully placed your fingertips inside the gill covers in the "V" shape of the gill path, you should have a stable hold. [source: Jeffs]

While a pike won't outwardly try to bite you in defense the way a dog might, its massive jaw is filled with jagged teeth pointing in several different directions. A caught fish will thrash and struggle in an effort to free itself, and may unknowingly cause you harm. The grip described above gives you the control and leverage to hold your pike with one hand and maintain safety for both you and the fish.