Browse the article How to Clean Panfish 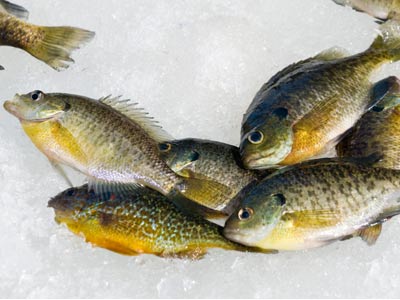 Panfish lay on ice of lake in Michigan.
iStockphoto.com/Douglas Allen

Let's put it right out on the table: Cleaning­ panfish is messy business. But don't let that put you off. There are few meals more sublime than freshly caught panfish -- assuming that fish is small enough to fit in a pan. Perch, crappies, bluegills and sunfish are among the most common and popular panfish.

The fishing community falls into two camps: those who scale panfish and those who don't. Some folks scale the fish, debone them and then prepare them with the skin ­on. Others simply fillet the fish, negating the need for removing scales. Still others prefer to leave the bones in; they simply scale and gut the fish and cook them. In the end, it comes down to personal preference.

­We'll cover all the steps -- removing scales, gutting, deboning and filleting -- so that you can choose the method that works for you.

Something to know before getting started: Fish are delicate, so once they're caught, take care when handling them. Roughness will lead to soft flesh (rather than firm), a strong flavor and that fishy smell everyone wrinkles their nose at.

Scales are the thin, rigid, overla­ppin­g plates that protect the skin of a fish. Before scaling, cover the cutting board with several layers of newspaper. This will help with cleanup. And since it takes several panfish to make a meal, you'll need lots of newspaper because you'll need a fresh sheet for each fish.

Before starting, wash the fish in cool water -- wet scales are easier to remove.

Once you have a fish scaled, set it aside in a shallow pan. Wrap the scales in newspaper and discard. Repeat the procedure for each fish.

Have a strong stomach? Good, because it's time to gut them.

The tools for cleaning fish are basic:

If scaling with a knife or spoon seems too hard or too messy, fish-scaling tools are available. These gadgets range from rasplike tools used to scrape the skin to electric scalers that work like sanders. These tools can be found at sporting goods stores or tackle shops.

­Once the fish are scaled, it's time to gut them. It's a relatively si­mple procedure because most of the entrails come out together.

OK, the worst parts of cleaning a panfish are now complete. The next steps will get you to the endgame.

Most freshwater fish die about 10 minutes after they're out of the water. Putting them in an ice-filled cooler will preserve the meat until they can be cleaned. The sooner the fish are cleaned, the better their flavor will be.

No­w that you've removed the scales and gutted the fish, the next step is deboning. Fish bones can easily get stuck in the throat and cause choking, so most people prefer to eat boneless fish. The key piece of equipment here is the knife: Make sure it's sharp and flexible. Do not use a serrated knife because it will shred the flesh [source: Active Angler].

Set the meat aside, wrap the remains in the newspaper and discard. Repeat the procedure with each fish.

To learn how to remove fillets from panfish, continue reading.

Cleaning fish is a slimy job. All that slime can make handling a sharp fillet knife tricky because it gets slippery. Metal-mesh fish-cleaning gloves can help get the job done without injury.

Th­e procedure for removing fillets­ from panfish is similar to deboning.­ It's a different way to achieve the same result. Scaling is not necessary if you're going to remove the skin when filleting.

Voila! You now have fresh panfish fillets ready for freezing or cooking. Enjoy!

Fillets are easily frozen for future use. Completely cover the fillets with water before freezing (this will prevent freezer burn). Storing fillets in self-closing freezer bags will keep the fillets fresh for up to six months [source: Ontario Fishing].