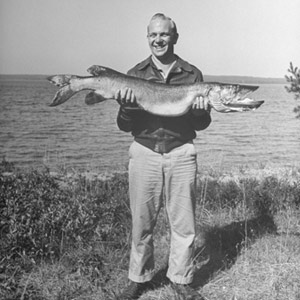 You've always considered yourself an angler. You catch plenty of panfish, with a bass or two thrown in for good luck. But then you think about it. Those bass were so small you had to throw them back. And you've had goldfish bigger than some of the panfish you caught. That's it, you decide. You're going to stop fooling around and catch yourself the big one, the monster, the one you can mount on the wall of your den. If you're looking for a big fish, you've found your challenge in muskie.

Known in full as muskellunge, the muskie -- or musky -- can be quite the magnificent catch, but it's not ­without hard work. However, there is a bit of legend regarding the difficult strategy for catching muskie. Folklore persists that in order to catch muskie, one must use huge lures on a heavy line while trolling quickly across the lake [source: Vance's Resort]. However, this is not the case, as long as you know what you're doing.

So if you find yourself in the Great Lakes region -- or even better, Canada -- the muskie can be your goal. It's a definite step up from that baby bluegill your goldfish could swallow.

So when to go? It depends on your goal -- one big behemoth, or a whole mass of muskie. Read on to find out when to go to catch each.

If you know what you're doing and have a bit of technique, y­ou­ can catch a muskie with a lure in any season. For the rest of us, there are a few times that might increase our odds.

Larger muskies are often caught in the spring. And, a bit ironically, they are often caught with small, walleye-sized baits [source: Jensen]. However, the folklore doesn't lie when saying it takes a bit of work. You'll need to be really patient if you want to get one of those big ones.

So let's say your previous monster was a 10-inch (25 centimeter) bass. You don't need a 60-inch (152-centimeter) muskie to make you happy! If you're hoping for more action and willing to settle for a smaller muskie, try heading out between mid-summer and late fall. You might not catch a record-setter, but you're more likely to get a fish without having to wait days for it.

So you've made your decision as to whether you're tracking a monster muskellunge or a minor one. Do you have to get up before the crack of dawn, or should you make sure you pack a blanket and some night lights? Read on to find out the best time of day for catching muskie.

In some places, the minimum size just to keep a muskie is 48 inches (1.2 meters)! You might think that's huge, but 48 inches is really just a medium-sized musky [source: Vance's Resort]. There's a reason these bad boys are called the king of the freshwater fish. Get that wall ready!

Rea­dy to head out at whatever hour the muskies will be just begging to jump into your boat? Even experienced anglers can go an entire day and be lucky to catch one muskie -- as they say, it's the fish of 10,000 casts. Because the muske­llunge can be so difficult to catch, there isn't a lot of concrete evidence as to the best time of day.

Some fishermen say the best time is whenever the weather stays the same. Whether that weather is good or bad doesn't matter, just as long as the barometric pressure remains steady. Some anglers maintain cloudy days are best, and others feel dusk is the perfect time. Some say dawn as well as dusk work well, and still others argue there's no perfect time at all.

Maybe if the muskellunge could be caught more frequently, we would have a more tangible answer -- though its difficulty is part of the fun. If any consensus can be found, it would seem that low light is the best time -- meaning that early morning and late evening, as well as overcast days, are the highest odds you can count on [source: Thomas].

Though some agree that the tiny window between sunset and moonrise is the best time to try for muskies, even they acknowledge that it's not always successful [source: Michelin]. With such a difficult catch, patience is the key.

Ready to catch some serious fish? You'll need some serious gear. But if those legends of needing heavy line and huge rods are just that -- legends -- then read on to find out what actually works.

Heading out in the spring hoping to make a record catch? Be sure to bring something to document your catch with. The previous world record holder of more than 50 years was recently proved to be phony. The late Louie Spray's purported 69-pound, 11-ounce muskellunge from 1949 was revealed to have been about 40 pounds, at most. The World Record Muskie Alliance compiled a 93-page document filled with analyses, including the fact that the fish's length versus weight ratio based on the dimensions given would have been impossible. They say there is also evidence of the local taxidermist stretching the fish an extra 10 inches to help Spray out [source: CBS News].