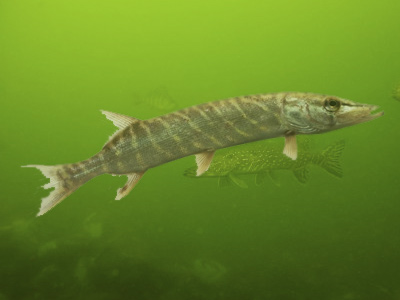 A­ great way to find a giant conglomeration of fish is to seek out their spawning grounds. At the first signs of spring all across the United States, fish begin migrating toward their favorite reproductive spots. The key is to be ready when they are. So you want to find muskie? Let's go.

Muskie spawn just a few weeks later than their cousins -- northern pike -- but in much the same way. Male muskie arrives in favored spawning waters before the females, and the females leave as soon as they deposit their eggs. But unlike ­newly-hatched pike, muskie fry don't attach to vegetation for support. Instead, they fall to the bottom of the spawning area.

­Spawning generally lasts up to 10 days, during which a 40-pound (a little more than 18-kilogram) female muskie can release anywhere from 18,000 to 200,000 eggs. Males swim beside a female while releasing their seminal fluid, or milt. Some muskies have a second spawn that occurs about 14 days after the first [sources: Muskie411, TWRA].

Any spawn can be fascinating, and muskies are no exception. In this article, we'll discuss when and where the muskie spawn takes place, along with how to take advantage of this prime fishing time.

Th­e spawn itself is prime fishing time, but it may be better to head out before that time. The pre-spawn period can make for some great fishing. Check with your local Department of Natural Resources (DNR) to ensure pre-spawn fishing is legal in your area. If you're good to go, consider giving the pre-spawn a try.

As soon as the water temperature starts to rise in spring, muskies begin their migration to the same breeding grounds as the year before. During this pre-spawn period, female muskies are eating as much as they can muster. The female feeds aggressively during pre-spawn, as she bulks up her egg mass. The pre-spawn period tends to be February and March; you can catch plenty of hefty females during this time.

Muskies are considered sexually mature somewhere between three and four years of age. When they're old enough, they'll spawn when the temperature hits between 49 and 59 degrees Fahrenheit (9.4 and 15 degrees Celsius). Temperature is key to most fish spawns, so check the weather reports for your area to determine the best time to head out with your rod. Typically, muskie will spawn in April.

After the fish have had their share of the spawn, fishing opportunities will drop off. The female leaves the spawning site as soon as she's finished dropping her eggs, usually around one to two weeks after spawning starts. Male muskies tend to stay at the spawning site for a few weeks after spawning is complete. Muskie eggs hatch out in as little as 8 to 14 days. To help them grow, the fry first digest their yoke sac, then nearby plankton and then fish [source: Freshwater Fishing Canada].

Now you know when the muskie are spawning, but where do you find them? Read on to discover the top spawning locations.

Muskies are often mistaken for pike because of their long bodies and bill-like snouts. Look at the coloring: Muskie colors are dark on light, which is the exact opposite of the northern pike. One of the best ways to differentiate a muskie from a pike is by studying the head. Musky have six or more pores underneath and along both sides of their jaws. By comparison, pike will have six or less pores.

In waters where both species are found, muskie spawn in deeper waters than they would normally choose. Because young pike are already in the water when muskie spawn, having separate breeding grounds helps to prevent the older pike fingerlings from feeding on their younger fry cousins.

As with most things in life, muskie spawns are all about location, location, locat­ion. Feeder creeks and reservoir headwaters are usually clearer, shallower and warm up faster than deeper, darker areas of water. There are plenty of muskies in these areas to fill your cooler.

To find muskie during spawning periods, check out:

When you find the right location, look for specific areas that contain the things muskie like best:

Post-spawn muskie are heading back out of the channels and backwaters, eating whatever comes easiest. Once females are done spawning, they immediately leave the area and head back into deeper waters. She will recuperate for a short while, and then go back to being her normally aggressive self. Males move from the area after a short period of time, also heading to deeper summer waters. Once muskie move from their spawning areas to summer habitats, fishermen will need to change tactics to find this fish, which is aptly nicknamed the "fish of 10,000 casts" [source: Smith].

What equipment do you need to catch muskie? Read on to learn how to fish during the spawn.

The city of Hayward, Wis., sports a giant fiberglass muskie landmark that's part of the Fresh Water Fishing Hall of Fame & Museum. You can actually climb up into the mouth to enjoy a view of the city. The massive building was featured in the film "Blood Hook." The working title of the movie -- "Muskie Madness" -- was changed out of fear that no one would know what a muskie was [source: IMDb].

Muskie Fishing During the Spawn

Muskie­ can be quite moody, so catching them can be kind of like getting the attention of your oblivious beloved on the playground. In order to get their attention and keep it, you're going to need a healthy dose of patience and some key tools.

Again, you'll need to check with your local DNR about live bait regulations, but if you're going for artificial, try these:

One of the best ways to catch a muskie is to go for the famous figure-8 move. Look out over the water, imagine you're holding a pencil, and draw an 8 right there on the water.

When a tasty treat does swim by, a muskie can strike out at speeds of more than 30 miles per hour (48.28 kilometers per hour) [source: Jones]. Make sure that you're situated in such a way that you don't lose your b­alance. If you're lucky enough to land a huge muskie, the last thing you want is to end up in the water. So grab your poles -- and maybe some flowers and chocolates -- to lure that monster muskie out during the spawn.

For lots more information on muskie spawn, other types of fish and related topics, hook yourself onto the links on the next page.

Don't forget to check out pools and shallows around the backside of an island. These can be a favored spot for spawning, and they can be easier to access during pre- and post-spawn.