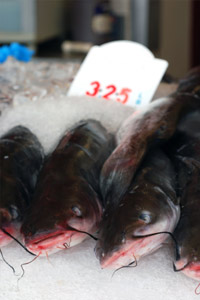 He may not be­ the most beautiful fish in the sea, but ­the catfish you just caught can be mighty tasty. There's just one problem -- he has to be skinned first. Removing the skin of a fish often makes it taste better, and it also removes the layer of fat just under the skin. [Source: Take Me Fishing]

To skin a catfish, it's important to prepare properly. Put the fish on a flat surface and hold the head with a clamp. For safety, make sure the catf­ish is firmly secured. Next, make sure you cut the catfish's spines before skinning. Now it's time to get to the actual skinning.

Cut the skin behind the head and pectoral fins. Use pliers to remove the cut skin from the catfish, starting at the head and pulling toward the tail. Then, grasp the head of the fish with one hand and the body with the other. Using both hands, break the backbone of the catfish at the head, and then pull the head and guts away from the skinned body. [Source: Take Me Fishing]

That's all there is to it! Once the fish has been washed in clean water, it's ready to be cooked.