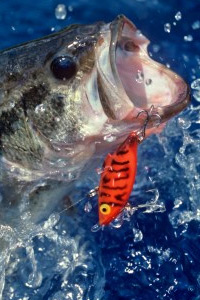 It's easy to see why angling with a lure that looks like a fish, smells like a fish and moves like a fish will catch more fish. That's exactly why soft-plas­tic fodder that imitates lures, commonly referred to as swimbaits, is becoming so popular among bass fishers.

So why use swimbaits over live bait? For one thing, swimbaits offer a great deal of control, unlike live bait, which literally have minds of their own. The more obvious reason to choose swimbaits is, of course, that they work.

Swimbaits have been all the rage on the West Coast for a while, but their popularity is rapidly migrating eastward [source: Bolton]. Many anglers choose swimbaits for their size because big baits catch big fish. Typically, swimbaits are 4 to 8 inches (10.2 to 20.3 centimeters) long, making them the perfect choice if you're trying to land a bass worthy of a trophy.

Most swimbaits are constructed of molded plastic and are made either in one solid piece or sectioned so that they produce a more lifelike side-to-side motion when being pulled through the water. But modern swimbaits have much more going for them than just the way they swim.

Swimbaits are made by pouring heated plastic into molds. As the plastic in the molds begins to cool, various flavors, scents, dyes and reflective materials are added to the mix. This makes these lures not only move like live bait but look, shine and smell like them, too!

Now that you know what bass fishing swimbaits are, read on to learn when to use them.

When To Use Bass Fishing Swimbaits

­Ask a ­fisherman what the most effective lure is, and he'll most likely name whichever bait he used to land his last big catch. This is why many bass fishers swear by swimbaits, while others have been unwilling to move away from the lures that have given them success in the past.

Because of their size, swimbaits are best suited to catch lunkers. And while for many years they were mostly used for off-coast fishing, swimbaits are garnering a reputation for snagging big bass in lakes as well.

Swimbait enthusiasts insist that these lures can be used anywhere, anytime. What's more, manufacturers offer a wide variety of swimbaits for use in different conditions. Knowing what and where the bass that you're trying to catch eat, will help you choose the appropriate lure.

So if you're going after largemouth bass, you'll want a rainbow trout swimbait. If you're fishing during high-grass season, you may want to use a hollow swimbait and float it above the weeds.

Some anglers prefer using swimbaits during the colder months when fish swim in shallow waters, on windy days or during the summer when they're fishing closer to the bottom.

You may find that swimbaits work well on their own. Other bass fishers switch between plastic lures and live bait. Even so, more and more bass fishermen are realizing that when other baits fail, swimbaits can fool the smarter bass.

Swimbaits are designed to imitate the prey of various fish living in a variety of conditions. Can you guess how many different swimbaits are made? Read on to find out how many types of swimbaits exist.

Are Swimbaits Good for the Environment?

The PVC plastic used in the construction of swimbaits has been a source of controversy, since a lost non-biodegradable swimbait can be destructive in some fragile water systems. In response, many manufacturers have begun experimenting with different types of flexible polymers [source: Sorum].

The number of different sw­imbaits­ has grown steadily with the rising popularity of plastic lures. There may be fewer types of swimbaits than types of fish in the water, but there are certainly enough to help you make the catch. Below are some of the more commonly used swimbaits:

­It's one thing to have an arsenal of swimbaits in your tackle box, but it's another to know how best to use them. Read on to learn the various techniques for fishing with swimbaits.­

In addition to choosing the right swimbait, it's important that you have the right tackle and rigging. Spinning gear works well with swimbaits, and many bass fishers use either a Texas or Carolina rig [source: Reddington].

­The basic technique for using swimbaits is to cast you line as long­ as possible and reel it in as slowly as possible to create more lifelike movements. It's also important to use a large diameter line, since thinner lines tend to sink too quickly. Some bass fishers have found it necessary to adjust the tail size on some of their swimbaits in order to get the tail to more closely match the motion of a live fish.

The most important technique for swimbaits is the retrieve, and there are different methods for different situations:

Now that you're well versed in the different techniques for bass fishing swimbaits, you're ready to roll. Don't forget your tackle box!

One issue with swimbaits is that the plastic body can sometimes slide down the jighead. This can be avoided by heating the hook so that when you put it through the swimbait the plastic around the hook will melt and act as glue when it cools [source: ultimatefishingsite].