How is a crab boat like a floating city? 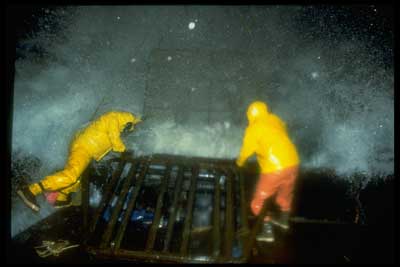 It's best you're buddies when the sea is against you.
Erik Hill/Anchorage Daily News/Getty Images

For all the danger associated with crab fishing, you'd think a position would be e­asy to come by. But it's not. Captains are particular about who they take on board. Once th­e season opens, the crew spends long hours together. There's no room for complainers who don't pull their own weight.

The money the fishermen earn is based on the number of crab that the fishermen haul in. But that's not all that goes into the work. The crew members also maintain the living quarters of the boat. Whether it's repairing an engine or fixing a dinner, if something needs to be done, any one of the crew must be ready and willing to take the reigns.

Crab fishing is a lifestyle, not a job. The money is lucrative, but there are certainly easier and safer ways to make a living. The money that you make depends on the quota for your ship. Some ships can stay out for four to five months, and the deckhands may make $80,000. For another vessel that stays out for three-and-a-half months, they'll rake in $40,000 each.

"The money is definitely an incentive, but the personal satisfaction is huge," Corey Arnold, a crab fisherman, told HowStuffWorks. "Crab fishing is not something to grow old in. Crab fishing is an experience, a test of your capabilities. For me, I was interested in pushing myself to the limit; it makes you a stronger person."

To read more about crab fishing and other survival scenarios, click through the links below.

What You Don't See on TV

Yes, there's the rough sea, aching cold and storms, Arnold told HowStuffWorks. But miles from land, the visitors, he said, are amazing. When a storm blows through, land birds can become caught in the winds, stuck out at sea. Unable to land on the water, they willingly land the ship and become temporary crew members. Arnold reflected on one bird, taken in and nursed by the crew during their time at sea. The bird gained strength and as the boat approached port, it took flight, heading for land. The next instant, as Arnold and the other deckhands looked on, an eagle swooped by and grabbed the bird in mid-flight.