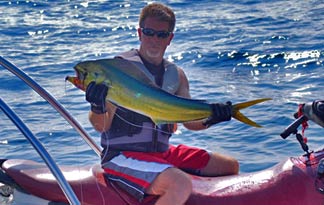 Obviously what species of fish you catch is going to vary according to the region in which you're fishing. In New Zealand, where PWC fishing seems to be increasingly popular, one prized catch is the kahawai, or Australian salmon, scientific name Arripis trutta. The kahawai, which is silvery with black spots, can grow to more than 3 feet in length and 33 pounds in weight. It is a fast-swimming, energetic carnivore that feeds primarily on anchovies, mullet and crustaceans. Because of its preference for eating small creatures, it's easily fooled by artificial lures, though mullet also works well as bait. Once hooked, the kahawai puts up a tough fight, full of acrobatic leaps, before it succumbs to your fishing skills. The kahawai isn't very tasty to cook, so throw it back to fight another day.

Off the East Coast of the United States, a PWC fisherman might be pleased to haul in rockfish, scientific name Morone saxatilis, also known as an Atlantic striped bass. The Atlantic striped bass is found from Florida to Canada. The distinctively big-mouthed fish has a blue to dark-olive back, a silvery underbelly and seven or eight stripes that extend lengthwise from the head to the base of the tail. It can attain a length of nearly 5 feet and a weight of close to 80 pounds. Rockfish reproduce in rivers and are seldom found more than a few miles offshore. A versatile carnivore, the rockfish's diet includes a variety of aquatic animals, including herring, eels, lobsters, crabs, flounder, sea herring and alewives.

Some species are overfished more than others. But remember -- every fish you catch and release is available to fight the line another day. Besides, if you're a PWC fisherman, you have an added incentive to throw them back: You don't have that much space on your small craft.