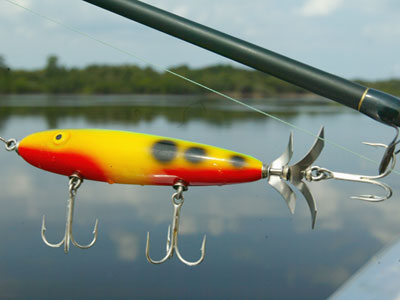 You can switch out the treble hooks on this lure for easier hook removal.
Ronald C. Modra/Sports Imagery/Getty Images

Fish live underwater and they're mea­nt to stay there as much as possible. They suck water through their gills, taking oxygen directly into the bloodstream through tiny capillaries. They have an outer mucous membrane coating that helps them fight topical disease. This coating must be kept wet at all times. The very act of taking a fish from the water can cause it a great deal of harm. That's why experienced catch-and-release sportsmen are very careful when they de-hook and reintroduce a fish into the water. And they do it as quickly as possible.

Fish can put up a heck of a fight when they're on the end of your line. But while a fish possesses excellent defense techniques, the act of attempting to free itself from the hook takes a lot out of the creature. When you see a fish struggling against the fishing line, jumping from the water and thrashing, it's depleting its tissue of oxygen through the stress of exertion. An oxygen deficit soon occurs, and the muscles begin to function without it. This causes lactic acid to build up on the muscle tissue, and that lactic acid eventually finds its way into the bloodstream. The pH, or measurement of the blood's alkalinity, drops because of the addition of the acid. Once the blood's pH is disrupted, it can mean curtains for the fish.

So how do catch-and-release fishermen hit the lakes and rivers without a guilty conscience? If they're skilled at landing and handling the fish and can remove the hook quickly, then the fish's blood will most likely go back to normal and everyone is happy. But if the fisherman takes too long to land the catch, then the fish could die, as much as three days later, from the imbalance in the blood. It's all about time. An experienced catch-and-release angler tries to get the fish back in the water as quickly as possible to prevent this from happening.

Another reason a fish can get injured is from the hook. Ideally, you hook the fish in the mouth -- it's called shallow hooking. Shallow hooking also includes the cheek and jaw. Deep hooking refers to a fish being hung on its belly, through the gills or deep into the throat near internal organs. Hooking the gills and stomach area is likely to kill the fish. Deep sea fish can also have trouble in surface pressure, just like a scuba diver does.

Then there's the matter of the mucous membrane layer on the skin. If you handle a fish with dry hands or gloves, or use a course, dry net, then you stand a good chance at removing much of this slimy layer. This opens the door for bacteria and pathogens to come into contact with the fish, potentially killing it.