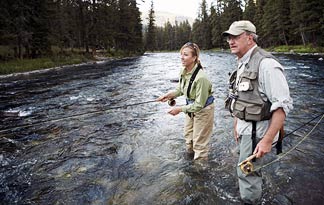 PROFILE OF A HELICOPTER FISHERMAN

When you saw the words "helicopter fishing," you probably assumed we were going to tell how to emulate "Madman of the Sea" and "Man vs. Fish" host Matt Watson's feat of diving from a chopper into the Pacific Ocean and landing on the back of a big marlin. But no worries -- we're going to tell you about a different, considerably less risky sort of helicopter fishing. This is the kind in which a copter provided by a sport fishing guide company ferries you to some remote, relatively pristine prime fishing spot -- usually one that you would have difficulty reaching by any other means of transportation. And along the way, you'll probably be able to enjoy a breathtaking, panoramic view of the wilderness.

Helicopter fishing might sound like the sort of pricey adventure that's enjoyed only by billionaire software moguls, movie stars or third-world dictators, but that's not really so. There are plenty of fishing-trip impresarios from Alaska to Australia who are willing to fly you to various remote anglers' paradises, with some day trip packages advertised for less than $500. For that much, the operation will drop you off at a fishing spot, provide a guide (at extra cost) and allow you to bring several fish back with you without additional charges. At the same time, if you've got bucks to burn, there are exclusive, high-end packages. At the posh yet rustic Nimmo Bay Resort in British Columbia, for example, you can engage the exclusive services of a copter and pilot who'll chauffeur your party out into the wild to catch some fish, and then have all of you back at the lodge by evening for a soak in the hot tub and dinner. The price for a party of six for four days is a mere $57,900. 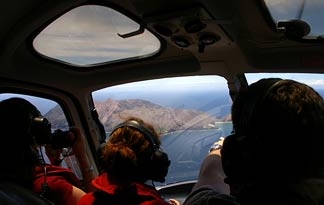 The most important piece of equipment is the helicopter, and that's provided by your outfitter. Various companies use craft ranging from Bell JetRangers to Eucoreil AStars, but the brand probably isn't as important as having a craft that's well-maintained and equipped with appropriate safety equipment, such as fixed floats or an inflatable flotation system if you're going to be flying over bodies of water. Obviously, you also want to have an experienced pilot who's certified under the Federal Aviation Administration's fairly stringent Air Tour Safety standards. The pilot should give you a brief but thorough primer on safety before you fly.

Another crucial piece of equipment that will be provided by the tour operator is a federally-approved life vest (or a "life preserver," as the FAA regulations call it). There are noninflatable and inflatable life vests, but the latter, which don't take up much space until you deploy them, probably make it easier to get out of a copter in case of an emergency water landing. You also need to have a device that's adjustable to fit your dimensions. If you want to be totally prepared, buy your own. One manufacturer, Life Support International, makes the $269 HV-35P Helicopter Passenger Vest, which has dual flotation cells that can be filled either by manually releasing a CO2 inflator or, if that fails, by blowing into the tube.

What sort of actual fishing equipment you use is up to you. Some helicopter fishing outfits will supply you with lightweight spin casting or fly fishing gear, which is all you need if you're going trout fishing. But you're usually welcome to use your own equipment, so you might as well. If you're going after salmon, for example, be sure to bring along some heavier gear. 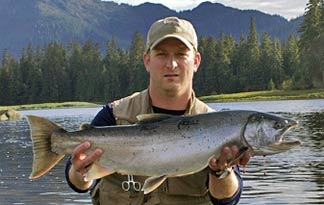 Why was Alaskan fishing named the most dangerous job in the world?
How are fishing quotas set?
How can fish bait spread disease?