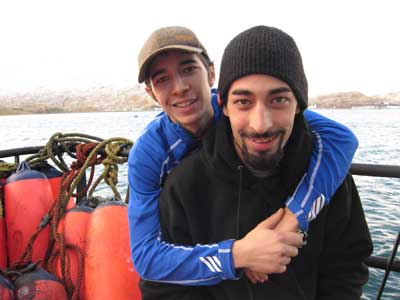 ­Once a greenhorn gets a job on a boat, he has to prove himself. Many captains don't trust greenhorns until they've proven that they work hard and they work safely. Greenhorns are a mixed blessing on a boat -- they're eager and ready to work, but also inexperienced.

Greenhorns work alongside deckhands, learning the labor and performing some of the least desirable tasks. For example, a typical greenhorn duty is to prepare bait for the crab pots. That means chopping up thousands of pounds of dead fish. Later, the greenhorn will have to crawl into the crab pot to hook the 12 pounds of bait to the trap -- a backbreaking chore. Greenhorns also are put to the task of chopping ice off boat rails with a sledgehammer. Crews do this to ensure the boat doesn't get weighed down by hundreds of pounds of ice that can quickly form in the freezing temperatures. Falling ice can also cause serious injury or death. Now imagine doing these tasks -- with sledge hammer or knife in hand -- on a boat that's listing from side to side, is slippery with ice, in 60 mph (80 kph) winds. And you haven't slept in days.

Because there's so much money at stake, crab fishing is very competitive. The northern latitudes only get about five full hours of sunlight, which makes the work even more difficult. Once a boat finds a honey hole -- a secret spot with a lot of crab -- the crew wants to haul in as much crab as possible for as long as the weather allows. Conditions on the Bering Sea are unpredictable and dangerous -- one rogue wave or mechanical breakdown can destroy an entire crabbing expedition.

Greenhorns also need to stay mentally alert without much sleep. Physical and mental exhaustion can lead to mistakes. In an industry as dangerous as crab fishing, mistakes can be very harmful. A deckhand unlucky enough to get hit with a swinging crab pot could get his or her head smashed in or legs crushed. One errant step into a moving coil of rope could fling him overboard. If he doesn't pay attention at the bait-cutting machine, he could lose an entire arm.

As if the physical and mental demands aren't enough, greenhorns also endure good-natured hazing from their fellow fishermen. Every crew has its own hazing rituals. Sometimes the captain will take the greenhorn's sharp fishing knife and replace it with a butter knife until he feels the greenhorn is experienced enough to handle a real knife. Some crews make the newest greenhorn bite the head off a dead herring for good luck and a good season. Crew members also will periodically throw fish at an unsuspecting greenhorn's head -- or maybe make him wear a Viking helmet with green horns [source: Stanley].

What happens if a greenhorn can't handle the job? When you're on a boat in the middle of the Bering Sea, you can't just get up and leave. Once you're out there, you're out there. If the situation is dire, though, a boat may return to dock. Seasickness can become very critical very quickly. People with severe seasickness become dehydrated and then delirious, necessitating professional medical attention and intravenous fluids [source: Hillstrand].

­For more information on crab fishing, haul up some links to related articles below.