How to Become a Greenhorn 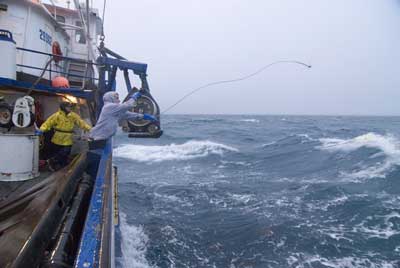 You can see why tasks like this one might lead to a man overboard situation.
Donald Bland/Discovery Communications LLC

A greenhorn is the lowest man on the totem pole on a crab boat. He or she works for a season or two on the deck, helping the deckhands and performing the grunt work. We'll cover those grunt work tasks in more detail in the next section.

What's the payoff? A successful crab boat can bring in nearly a million dollars in one trip. Crew members might go home with more than $50K for only a few weeks of work [source: Miller]. It's that promise of quick cash that lures many greenhorns into the crabbing lifestyle. But it takes a while to earn those spoils. Greenhorns typically receive only half of what the regular crew members make, what the industry dubs a half-share. Crew members earn a high-share or full-share. Also, many greenhorns and deckhands are expected to pay up front for their equipment and food, or the cost is taken out of their cut of the haul [source: Hutton]. Greenhorns and deckhands must also pay for their own fishing licenses. It may seem like a thankless job, but the point is this: Put in your time, and eventually you'll get promoted to full-share deckhand or crew member.

Besides the money, many greenhorns join the crab fishing industry for the challenge and the adventure. TV coverage, like the show "Deadliest Catch," has attracted more and more people to the industry. So how does one become a greenhorn? As with most jobs -- it's often who you know more than what you know. Most boats are family-run, and captains will only hire people they trust [source: ADF&G]. Knowing the new hire is important -- captains don't want to wind up with a greenhorn who has a nervous breakdown mid-trip. The Alaskan Bering Sea is extremely dangerous, and a captain usually won't take out anyone who doesn't have deck experience and general know-how.

If you're looking for a greenhorn position, job centers in Alaska will point you in the right direction. Some of them suggest that you simply hanging around at the docks and nearby bars to let skippers and captains know you're available for work. It's possible to get hired as a greenhorn deckhand with no previous experience if you can convince the captain that you'll work hard. There's no formal crab fishing training -- greenhorns learn on the job. However, fishing experience is always a plus. Many deckhands start with salmon fishing in the summer months in order to get a feel for the industry. Crab processing jobs are also a good way to get a foot in the door, even though pay is usually low.

With the recent crab rationalization measures put in place, fewer vessels go out each year, reducing the amount of available deckhand jobs. (Find out more about crab rationalization in How is a crab boat like a floating city?.) About 250 Alaskan crab boats go out each season and each crew typically has between three and nine deckhands [source: Deadliest Catch Facts]. Because of the pay, deckhand jobs don't turn over often.