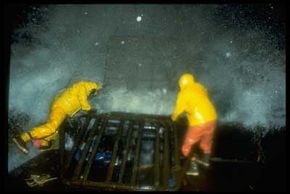 Wanted: Crew members for dangerous deep-sea crabbing. Location: The middle of an icy­ ocean. Description: Endure merciless hazing by fellow crewmen; work 15­ hours or more a day, seven days a week; risk your life; get paid only half of what everyone else gets paid on the boat.

Believe it or not, each year, people fight tooth and nail to land this position. Why? Because as brutal as the work is, the pay can be handsome. Crew members on a crab fishing boat can earn up to $15,000 in one month [source: Alaska Fishing Jobs]. Unfortunately, as with any career, before you earn top dollars, you have to start at the bottom. Entry-level crabbers are called "greenhorns," and you'll find at least one on every crab boat.

­To understand what a greenhorn is, let's first take a look at the meaning of the word. Originally, a greenhorn ref­erred to an animal w­ith green (or young) horns. By the mid-1600s, a greenhorn referred to a newly enlisted soldier. Then, in the 1830s, the word came to describe a very inexperienced person or a novice in a particular trade [source: Safire]. That last definition aptly describes the crab fishing greenhorn.

On a crab boat, a greenhorn is a newbie who may or may not have previous fishing experience. A greenhorn could be completely new to the fishing industry, or he or she could be several seasons in -- still learning the ropes on a particular boat. Commercial crab fishing is punishing and dangerous work, and many greenhorns quit after the first trip. To learn more about the work, read Why was Alaskan fishing named the most dangerous job in the world?.

We're not exaggerating about the difficulty of a greenhorn's job. In season two of the TV show "Deadliest Catch," the conditions on the Aleutian Ballad pushed the boat's greenhorn to his breaking point. Desperate to escape the vessel, Lysander Smith threatened to jump into the frigid water -- which would have meant certain death -- claiming he'd wait for the Coast Guard to rescue him. The ship had to make an unscheduled stop to return Smith to the harbor and pick up a fresh greenhorn. Smith's meltdown caused the Aleutian Ballad to lose hours of valuable fishing time. On dry land, Smith admitted that the job was simply more than he could handle.

Crab fishing is not for the weak of spirit.

How to Become a Greenhorn 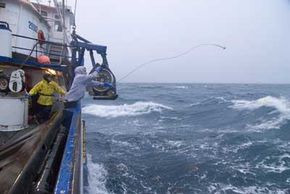 You can see why tasks like this onemight lead to a man overboard situation.
Donald Bland/Discovery Communications LLC

A greenhorn is the lowest man on the totem pole on a crab boat. He or she works for a season or two on the deck, helping the deckhands and performing the grunt work. We'll cover those grunt work tasks in more detail in the next section.

What's the payoff? A successful crab boat can bring in nearly a million dollars in one trip. Crew members might go home with more than $50K for only a few weeks of work [source: Miller]. It's that promise of quick cash that lures many greenhorns into the crabbing lifestyle. But it takes a while to earn those spoils. Greenhorns typically receive only half of what the regular crew members make, what the industry dubs a half-share. Crew members earn a high-share or full-share. Also, many greenhorns and deckhands are expected to pay up front for their equipment and food, or the cost is taken out of their cut of the haul [source: Hutton]. Greenhorns and deckhands must also pay for their own fishing licenses. It may seem like a thankless job, but the point is this: Put in your time, and eventually you'll get promoted to full-share deckhand or crew member.

Besides the money, many greenhorns join the crab fishing industry for the challenge and the adventure. TV coverage, like the show "Deadliest Catch," has attracted more and more people to the industry. So how does one become a greenhorn? As with most jobs -- it's often who you know more than what you know. Most boats are family-run, and captains will only hire people they trust [source: ADF&G]. Knowing the new hire is important -- captains don't want to wind up with a greenhorn who has a nervous breakdown mid-trip. The Alaskan Bering Sea is extremely dangerous, and a captain usually won't take out anyone who doesn't have deck experience and general know-how.

If you're looking for a greenhorn position, job centers in Alaska will point you in the right direction. Some of them suggest that you simply hanging around at the docks and nearby bars to let skippers and captains know you're available for work. It's possible to get hired as a greenhorn deckhand with no previous experience if you can convince the captain that you'll work hard. There's no formal crab fishing training -- greenhorns learn on the job. However, fishing experience is always a plus. Many deckhands start with salmon fishing in the summer months in order to get a feel for the industry. Crab processing jobs are also a good way to get a foot in the door, even though pay is usually low.

With the recent crab rationalization measures put in place, fewer vessels go out each year, reducing the amount of available deckhand jobs. (Find out more about crab rationalization in How is a crab boat like a floating city?.) About 250 Alaskan crab boats go out each season and each crew typically has between three and nine deckhands [source: Deadliest Catch Facts]. Because of the pay, deckhand jobs don't turn over often. 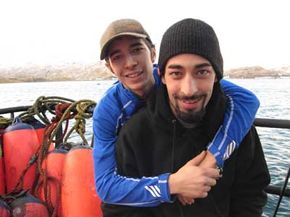 ­Once a greenhorn gets a job on a boat, he has to prove himself. Many captains don't trust greenhorns until they've proven that they work hard and they work safely. Greenhorns are a mixed blessing on a boat -- they're eager and ready to work, but also inexperienced.

Greenhorns work alongside deckhands, learning the labor and performing some of the least desirable tasks. For example, a typical greenhorn duty is to prepare bait for the crab pots. That means chopping up thousands of pounds of dead fish. Later, the greenhorn will have to crawl into the crab pot to hook the 12 pounds of bait to the trap -- a backbreaking chore. Greenhorns also are put to the task of chopping ice off boat rails with a sledgehammer. Crews do this to ensure the boat doesn't get weighed down by hundreds of pounds of ice that can quickly form in the freezing temperatures. Falling ice can also cause serious injury or death. Now imagine doing these tasks -- with sledge hammer or knife in hand -- on a boat that's listing from side to side, is slippery with ice, in 60 mph (80 kph) winds. And you haven't slept in days.

Because there's so much money at stake, crab fishing is very competitive. The northern latitudes only get about five full hours of sunlight, which makes the work even more difficult. Once a boat finds a honey hole -- a secret spot with a lot of crab -- the crew wants to haul in as much crab as possible for as long as the weather allows. Conditions on the Bering Sea are unpredictable and dangerous -- one rogue wave or mechanical breakdown can destroy an entire crabbing expedition.

Greenhorns also need to stay mentally alert without much sleep. Physical and mental exhaustion can lead to mistakes. In an industry as dangerous as crab fishing, mistakes can be very harmful. A deckhand unlucky enough to get hit with a swinging crab pot could get his or her head smashed in or legs crushed. One errant step into a moving coil of rope could fling him overboard. If he doesn't pay attention at the bait-cutting machine, he could lose an entire arm.

As if the physical and mental demands aren't enough, greenhorns also endure good-natured hazing from their fellow fishermen. Every crew has its own hazing rituals. Sometimes the captain will take the greenhorn's sharp fishing knife and replace it with a butter knife until he feels the greenhorn is experienced enough to handle a real knife. Some crews make the newest greenhorn bite the head off a dead herring for good luck and a good season. Crew members also will periodically throw fish at an unsuspecting greenhorn's head -- or maybe make him wear a Viking helmet with green horns [source: Stanley].

What happens if a greenhorn can't handle the job? When you're on a boat in the middle of the Bering Sea, you can't just get up and leave. Once you're out there, you're out there. If the situation is dire, though, a boat may return to dock. Seasickness can become very critical very quickly. People with severe seasickness become dehydrated and then delirious, necessitating professional medical attention and intravenous fluids [source: Hillstrand].

­For more information on crab fishing, haul up some links to related articles on the next page.

Debra Ronca "What are greenhorns on a crab vessel -- and why are they called that?" 18 August 2008.
HowStuffWorks.com. <https://adventure.howstuffworks.com/outdoor-activities/fishing/fish-conservation/responsible-fishing/greenhorn.htm> 30 June 2022
Print | Citation 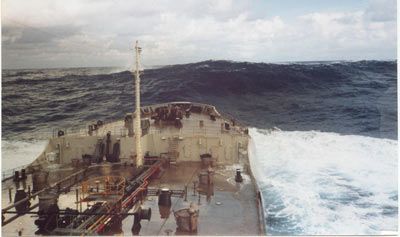 Up Next
How Rogue Waves Work
Explore More 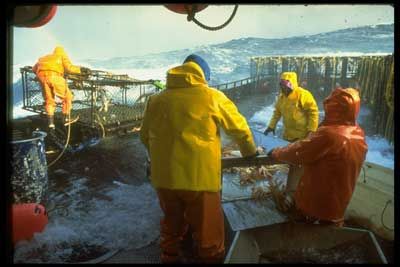