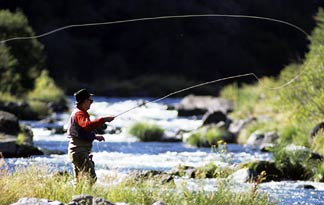 PROFILE OF A FLY FISHERMAN

If you've ever watched a fly fisherman wade into the river and begin to dance his glinting line above the rushing water, you've probably developed an envy of his art -- not to mention his gear. Something about those waders, which make it possible for him walk around in a rushing stream without getting wet, and his fishing vest pregnant with tools and flies suggest fishing prowess.

The fly fisherman's challenge is simple: to trick a fish into believing his artificial fly, whipping around at the end of his fishing line above the water, is in fact a flying insect. What sets fly fishing apart from other types of fishing is that the line is actually heavier than the fly. Usually, the weight of the bait or the lure at the end of the line carries the line out over and into the water. But fly fisherman count on the line to carry out the light-weight fly. And the line must move in a way that creates the illusion of a flying insect -- for example, a mayfly.

The flies used for fly fishing are usually crafted with more detail than the basic lure -- to make them seem even more believable to the fish. And, in fact, creating or meticulously choosing the proper fly is part of the allure and addiction of fly fishing. Dancing your line above the water takes skill, as well. One author of a fly fishing book compared learning how to fly fish to learning how to swing a golf club or a tennis racket. It's something that you learn and then continue to perfect over a period of years or even a lifetime. 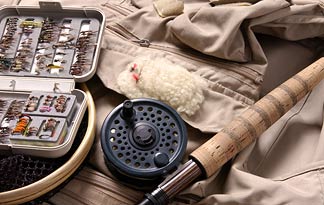 The first thing in a fly fisherman's bag of tricks is waders or hip boots -- what he'll wear to more easily maneuver the currents of a river, stream, lake or ocean. Whether you want waders or hip boots depends on where you plan to fish. Obviously, if you have your eyes on a deeper river or stream, you'll prefer chest-high waders to be sure water doesn't seep into your socks. Some waders are ankle-tight, which means they provide support to your ankles, and the tighter fit prevents blisters. The downside is they're difficult to take on and off. Waders are either stocking-foot or boot-foot. With stocking-food waders, you'll need to slip on a separate boot over your waders. Most boot-foot waders have felt soles, so you won't slip when you're walking around in the water on the rocks and other precarious surfaces.

You'll also need the obvious: rod, reel, line and fly. Because your line needs to be heavier than your fly, you'll need to work backwards from your fly to determine what type of line, rod and reel you'll want. As Dave Hughes, author of "Fly Fishing Basics" explains, you'll decide the type of fly you want based on what the fish eat. The line must be heavy enough to carry your fly gracefully over the water. And the rod and reel must be able to properly handle the weight of your line.

You might also like a pair of polarized glasses, which reduce glare and help you to see the fish beneath the surface of the water. Most fishermen also wear fishing vests, and you'll need a bag to carry your boxes of flies, flashlight and other miscellaneous tools. 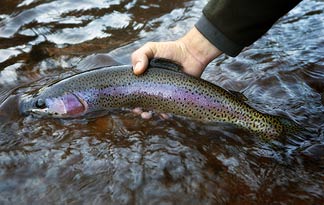 There are plenty of fish in both fresh water and salt water habitats willing to bite a fly fisherman's line. In fresh water, fishermen may land large and smallmouth bass, landlocked and Atlantic salmon, perch, Arctic char, trout and walleyes, to name a few. In sea water, fly fisherman may gun for barracuda, striped bass, bluefish, mackerel and sailfish, among others.

Trout is a common target for fly fishermen, and it's found in the stereotypical fly fisherman's flowing streams. But to catch trout, you need to know where it's likely hang out and what it's likely to eat. For example, according to Hughes, trout generally prefer waters between 45 and 65 degrees Fahrenheit. They become worn down by the current, so they usually hang around in nooks away from swift-moving waters. They have a pretty good sense of smell, which is why your waders will come in handy -- they'll block your body's scent from seeping into the water. And as for flies, you should choose one that's soft. Trout won't like the taste of a fly, no matter what. But they also won't like the feel of a hard fly and will be quick to spit it out. So you should use one that's soft. mayfly, caddisfly and stonefly are trout favorites.

The best way to land a fish is to research it. Does it have a good sense of hearing? If so, keep quiet while you wade in the stream. How is its eyesight? Should you crouch while you cast your fly or cast it from further away in order to stay outside its range of sight? Knowing these types of things about the fish will help you to cast your line in the proper place with the proper fly.