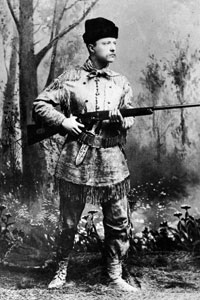 You can thank Teddy Roosevelt for that fishing license you have to purchase.
Pictorial Parade/Getty Images

Back­ in the heady days of the 19th century, people didn't need a license to fish in America. Fishermen just took their poles and their bait to the nearest body of water and pulled trout, bass or walleye from it to their heart's content. No big government existed that required them to pay for their natural right to go fishing.

Of course, that was back when there weren't so many people living in North America. The native population declined by about 95 percent due to disease and genocide between 1492 and 1620, and the continent was being repopulated by immigrants from the East [source: Mann]. The vastness of North America and the comparative lack of people made its wildlife stores seem limitless. And as with all natural resources, when human populations increase, wildlife populations decrease.

­With people moving to the United States in record numbers and recreational fishing rivaling commercial fishing in numbers of fish caught, Americans -- or anyone else for that matter -- didn't yet fully grasp the concept of wildlife management. Thanks to forward thinking by President Theodore Roosevelt and other conservationists, the public came to understand that the vast stores of wildlife would eventually be depleted. As a result, some states began requiring visitors from other states to purchase a license to fish. When populations continued to grow, states began requiring their own residents to pu­rchase licenses as well.

Although the concept of North American wildlife abundance began to disintegrate in the early 20th century, it took more time for that idea to extend to our view of the oceans. It wasn't until late in that century that some coastal states began requiring recreational fishermen to purchase a saltwater or marine fishing license. By then, many coastal fish species were already endangered due to commercial and sport overfishing [source: Nelson].

So how does issuing licenses that allow fishing protect fish? Find out right now. 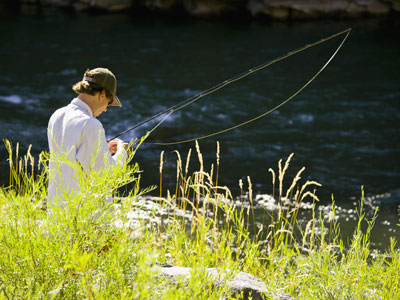 It may seem counterintuitive, but issuing licenses to fish has actually proven to protec­t fish populations (the same holds true with hunting). This protection forms a circle that begins when an angler pays a licensing fee, which ultimately benefits him or her in the form of plentiful fishing.

When states institute fishing regulations, they generally apply limits to the species and amount any given fisherman can catch and keep in a day. These limits are included in information accompanying fishing licenses, so people who fish become educated to catch limits. What's more, conscientious anglers can report poachers -- anyone who hunts or fishes outside of regulations and standards -- if they're noticed with heavier hauls than allowed by law.

Licenses also give state and federal wildlife officials the opportunity to identify poachers. By allowing officials to spot-check anglers for valid fishing licenses, wildlife departments create the fear of being caught fishing illegally. Since state departments of natural resources generally offer licenses at reasonable fees -- usually between $10 and $40 -- but levy hefty fines from hundreds to thousands of dollars for people who violate regulations, it makes sense for most people to follow the rules.

Although some sport anglers might think so, the rules aren't arbitrary. Wildlife and natural resources departments set size and number limits and schedule fishing seasons based on data produced by research funded by fishing license fees [source: Take Me Fishing]. While much of the fees from licenses go to support the budgets of state wildlife departments, it also goes to fund wildlife research. Understanding how fish mating patterns, migration and other behaviors helps biologists (or in the case of fish, ichthyologists) better understand how to help better protect those species. With populations maintained, good fishing is ensured for both present and future generations of anglers.

One example of conservation through research funded by fishing license fees came in 2007 in Washington. The state's coastal rockfish populations were dwindling and in response, its Department of Fish and Wildlife passed an extra 50-cent charge for fishing licenses. The added charge generated $200,000 dedicated exclusively to studying rockfish -- which are notoriously hard to examine because of their rough underwater habitat. Officials hope to use their findings to avert future restrictions on rockfish angling [source: WDFW].

Purchasing fishing accessories also goes to help conservation efforts that ultimately ensure good fishing. In 1950, the U.S. government passed the Federal Aid in Sport Fish Restoration Act (FASFRA). This voluntary agreement between the state and federal governments encourages states to protect endangered fish species and allows states to levy extra taxes on fishing gear like fish finders, poles, tackle and boat fuel [source: FWS]. The money goes to the federal government, which it uses to compensate up to 75 percent of costs borne by the states for fish conservation and management programs. It's been a successful program and a boon to states: In 2008, FASFRA yielded $398 million in grant funding [source: FWS].

The next time you grumble about having to purchase a license to fish or paying the fee, remember that fishing licenses not only help preserve fish populations, but better your chances of successfully landing a fish as well.

For more information on fishing and other related topics, visit the next page.

Why was Alaskan fishing named the most dangerous job in the world?
Do fish feel pain?
What's depleting salmon populations?