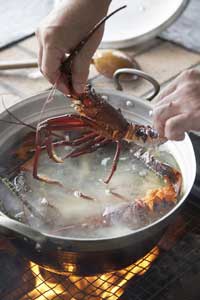 Can lobsters feel the pain of that boiling water?
Seiya Kawamoto/Getty Images

In the August 2004 issue of Gourmet magazine, David Foster Wallace asked readers to "Co­nsider the Lobster." What started out as a routine assignment to Maine's annual lobster festival spiraled into a quest to understand the lobster's point of view from entrapment to the dinner table. After all, lobsters look rather pathetic in grocery store tanks, clobbering each other with banded pincers. Their reward for enduring uncomfortable quarters is death by being boiled alive. And to top it off, the sound of steam whistling through the dying lobsters' shells mimics that of a final farewell scream.

Setting aside any anthropomorphic sentiment, what's the truth? Are people who cook lobsters merciless murderers who inflict cruel and unusual punishment on their crusty captives? (Spoiler alert: Wallace doesn't give us a concrete answer.) Pain is a complex experience to measure -- especially when the subject can't self-report. Mammals, such as your dog or cat, display more obvious pain signals by breathing heavily, guarding the wounded area of their bodies and vocalizing distress. Fish, on the other hand, thrash about on the end of the line, but that's about it.

­More precisely, Sneddon discovered the presen­ce of 58 pain receptors called nociceptors along the trout's lips. She did so by testing the effects of bee venom and acetic acid injections into the mouth area. The affected fish exhibited "anomalous behavior," such as rubbing their noses into gravel and shaking their bodies [source: Sneddon]. Since morphine appeared to ease the discomfort, Sneddon concluded that the trout's reactions weren't simply reflexive but genuine displays of pain response.

The study's reception among the fishing industry and other scientists wasn't entirely smooth sailing. One critique dismissed the findings, arguing that fish lack the brain complexity to feel pain. Others chalked it up to a natural physiological response to a threatening situation. Animal rights advocates, on the other hand, saw it as proof positive of the inhumanity of recreational and industrial fishing.

In a way, all parties were correct. 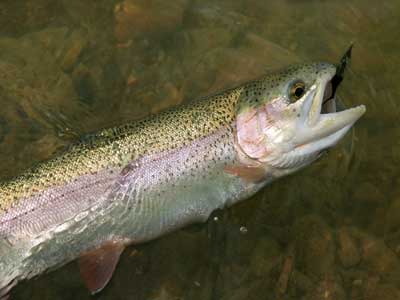