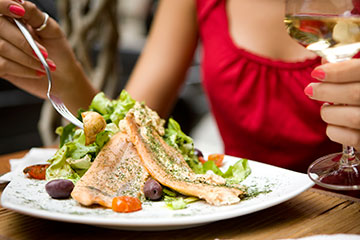 Many restaurants substitute the fish specified on the menu for a cheaper cut.
webphotographeer/Getty Images

Americans have long been told that they should eat more fish. The American Heart Association, for example, recommends noshing on a variety of fish at least twice weekly. Many citizens have happily complied; the U.S. is the world's second-largest consumer of seafood, coming in second only to China [source: Oceana]. While that's great news in general, it comes with a word of caution: Rampant fish fraud is occurring around the globe.

Seafood fraud (aka fish fraud) is anything that disguises or falsifies information about the fish you purchase in order to increase profits. One example: changing the expiration date on packaging to make fish seem fresher. But most of the news about fish fraud centers on mislabeling one type of fish as another. In a damning 2012 study conducted by Oceana, an ocean conservation group, the organization reported 33 percent of the fish it tested in restaurants and markets weren't the ones they were purported to be. Since typical fish fraud involves swapping out pricier fish for cheaper varieties, these results translated into a $25 billion annual hit to Americans' pocketbooks [source: Lou].

The FDA has laws on its books to thwart fish fraud, but some in the industry complain its enforcement efforts are weak. Less than 1 percent of all imported fish is inspected specifically for fraud. But that's partly because fewer than 100 National Oceanic and Atmospheric Administration (NOAA) agents are performing inspections, and due to budget cuts that number is likely to further diminish. A larger issue may be that 90 percent of the seafood Americans chow down on comes from foreign countries that often have lax aquaculture regulations. These include Canada, China, Ecuador, Indonesia, Thailand and Vietnam, with Thailand and Vietnam by far the worst offenders [sources: Lou, Oceana].

Fraudulent fish most often come in filet form; it's harder to properly identify seafood without its head, tail or other features. Some of the more commonly swapped fish include grouper, cod and snapper, which are often replaced by fish that are much less expensive and/or desirable. And while Americans are talking about the issue a lot these days, it's hardly a problem unique to the U.S. Seafood is one of the world's most commonly traded foods, and more than 100 other studies have uncovered seafood fraud in 29 countries located in all continents save Antarctica [sources: Lou, Oceana]. Clearly, this is a global problem.

The Most Mislabeled Fish 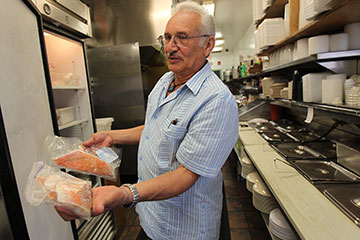 Red snapper is the most mislabeled fish. Here, Nobel Garoa, owner of El Oriental de Cuba admits he used to substitute ocean perch for red snapper, but no longer does that. He shows red snapper on the right, and ocean perch on the left.
Suzanne Kreiter/The Boston Globe via Getty Images

It's pretty hard to pass off certain seafood as something else; lobster is one that comes to mind. Yet it's relatively easy when you're looking at less-identifiable types of fish. Here's a list of some of the more commonly mislabeled fish, along with their often-used substitutes [source: Oceana]:

Some of the fish most often mislabeled from the list above are grouper, snapper and white tuna. Grouper is an obvious choice for fraudulent substitutions, as swapping it out for Asian catfish, for example, nets the seller four times more money. But another problem with grouper is that the Food and Drug Administration (FDA) recognizes 66 species of fish as "grouper," making it difficult for distributors and restaurateurs to know what's what [source: Lou].

In the Oceana study, an astonishing 87 percent of snapper samples were mislabeled, making it the most mislabeled type of fish. Tuna came in second, with a 59 percent mislabeling rate. White tuna is especially problematic. It's not even a real fish species. Albacore tuna is, and that's considered white meat, which is how the term "white tuna" came into existence. Escolar is almost always slipped in as white tuna's substitute, though escolar is banned by the FDA because it acts as a laxative [sources: Goetz, Oceana]. 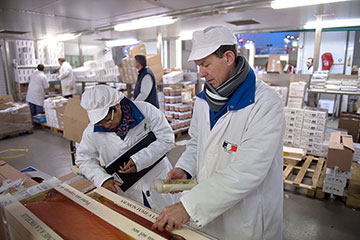 What to Do About Fish Fraud

Unless you're a fisherman (or -woman) who really knows fish species, it's difficult to fight fish fraud. Still, there are some steps you can take. Whenever possible, purchase a whole fish — fins, head and tail still attached. It's a lot more difficult for swindlers to substitute another fish for the one you're seeking when you can see exactly what the fish you're buying looks like. (Of course, this assumes you know what a red snapper or Chilean sea bass looks like, so bone up on that in advance.) Whether you're dining in a restaurant or browsing a fish market, ask lots of questions. Ask if a particular fish was wild- or farm-raised, where it was raised, or when and how it was caught. If the seller doesn't know or hedges, be suspicious [source: Oceana].

The FDA also maintains a list of acceptable market names for seafood. If you spot a fish labeled with a name that's not on the FDA's list, such as "white tuna," you can pretty much be assured that the fish is actually another species. Vet your fish retailer with the Better Seafood Board. Perhaps the easiest way to fight fraud, though, is to be wary of a quality fish carrying a low price. Sockeye salmon, for example, is not cheap. So if you're ordering or purchasing Sockeye salmon for a bargain-basement price, it's probably farmed Atlantic salmon or something else [sources: Goetz, Lou].

Lest you think the onus of fish fraud is only on consumers, it's not. While some complain the U.S. government isn't doing enough to fight fish fraud, a presidential task force made several recommendations on the topic in December 2015. One was for better international cooperation and collaboration on seafood labeling. Oceana is pushing for an international traceability system. The idea is that fish retailers would be required to know where and when a fish was caught, and even what gear was used, and would also be required to pass this info to consumers [sources: Lou, Barclay]

Scientists at the University of South Florida's College of Marine Science recently unveiled Groupercheck, a portable, handheld sensor that can identify grouper in 45 minutes, using DNA markers only found on real groupers. The device can be used by anyone from distributors to restaurateurs; the scientists hope to unveil similar devices for red snapper, shrimp, tuna and halibut [source: Trigaux].

Now that more attention is being focused on fish fraud, hopefully the practice will soon be on the wane.

Well, I will never look at another piece of fish the same way after working on this article. Partway through my research, I went to make dinner for my husband. Tilapia was on the menu. Tilapia is generally a fish substituted for another, higher-quality fish. Still, I wondered what the heck I was preparing for us to eat. I know a name doesn't mean anything, but I sure hoped it wasn't some species such as Patagonian tooth fish or threadfin slickhead, both of which sound quite unpleasant. At least the salmon I tend to buy is farmed Atlantic salmon, so I should be safe there.

What's the biggest threat to freshwater habitats?
What are fish managers?
Should fisherman always catch and release?