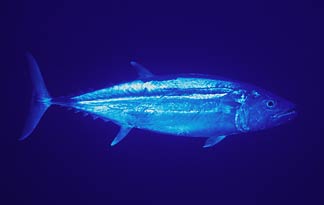 Not exactly known for being the most attractive fish in the sea, the dogtooth tuna has, in recent years, become increasingly sought after by sport fishermen seeking a challenge. The reason it's hard to haul in is because of a unique trick the dogtooth pulls once hooked -- it makes a speedy dive straight down, even against the heaviest tackle. The risk of the line snapping during this rapid descent makes the dogtooth one of the most difficult sport fish to land.

Watch Out for Sharks on the Line

If you're a dogtooth tuna (Gymnosarda unicolor) you'll probably spend most of your time swimming around the shallow reefs of the western Indian Ocean and as far north as Japan and South Korea. The reason you'll stay close to the reef is because of the delicious food available there. Medium-sized schooling fish are on the menu and since you're a vicious predator, you won't have any problem chomping down some mackerel, rainbow runners and scombrids. Aside from its speed and tenacious personality, the dogtooth makes for a very tough catch because shark's often mistake hooked dogtooth as bait. This means that in addition to reeling in a 100-plus pound fish, you might have a shark attached to it, who wants to play a game of tug-of-war.

The Biggest Dogtooth Tuna Are Found in the Deepest Waters

Until more recently, catching a dogtooth tuna was likely a happy accident. Fishermen who caught dogtooth usually were shooting for large billfish like marlin and swordfish. The dogtooth's legendary fighting capabilities and growing reputation as a food fish made it a prize catch for sport fishermen. Using live or dead bait on a long line gives you the best chance at landing a dogtooth, but artificial lures and high-speed jigs are becoming increasingly popular. While you can catch them at any depth, trolling the deeper waters will yield a larger, prized catch. They're also smart, looking for any way to snag the line on sharp, protruding reef. If you're feeling especially brave, try diving with a spear for an up-close angling adventure. The speed and agility of the dogtooth make it a favorite of spear fishermen.

Why You Should Throw It Back

Dogtooth tuna are not endangered, but most fishing conservationists recommend using proper catch-and-release techniques when angling for any deep-sea fish. As always, following the local fishing size, weight and number limits is the best way to practice ethically sound fishing techniques. Before you go fishing for dogtooth tuna, check the local rules and regulations.

Catch Me If You Can

Why was Alaskan fishing named the most dangerous job in the world?
How are fishing quotas set?
Should fisherman always catch and release?