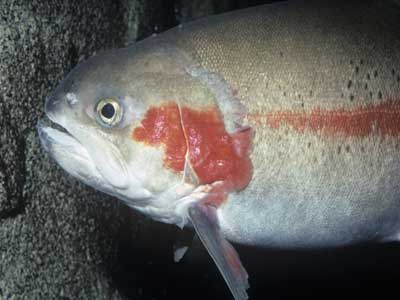 As if overfishing, po­llution and habitat-destruction haven't thre­atened the global fish population enough, virus strains creeping their way around the world are slaying even more saltwater and freshwater species. One virus that came to the United States by way of Eurasia in the 1950s is called whirling disease. Whirling disease is a parasitic infection that affects young trout and salmon. The parasite Myxobolus cerebralis first enters the fish's head and spinal cartilage, where it begins to multiply [source: Trout Unlimited]. As it reproduces, the parasite causes pressure around the fish's brain tissue to increase. Due to that added pressure, infected trout and salmon swim erratically in a whirling pattern [source: Trout Unlimited]. If the fish manages to survive the infection, it will suffer skeletal deformities.

Whirling disease is an example of an aquatic nuisance species (ANS), or a non-native organism that attacks native species and ecology. Maritime travel, human introduction of non-native species and reproduction all contribute to the growing problem of ANS. When it comes to fishing, you can think of the spread of ANS in the same way that you track mud from your shoes into a house. If you trudge around carelessly with soiled shoes, you'll leave a trail everywhere you go. The same goes for fishing gear and boats. You can track bacteria and infected species into untainted waterways, introducing new pathogens and possibly threatening the health of the aquatic ecosystem.

One way that fishermen may be "tracking" pathogens from lake to lake (or wherever they're fishing) is through fishing bait. Many piscine viruses target only certain species. However, other unaffected fish may harbor diseases and serve as vectors, or carriers. You can compare this to plague pathology. Rats and other vermin are often the vectors that eventually transmit the bacteria to humans. Similarly, trout or salmon that eat infected fishing bait -- whether alive or dead -- can contract whirling disease. The parasite's spores can also spread through infected waterways.

Since 2003, wildlife authorities in North America have pointed the finger at fishing bait as the culprit for the proliferation of another fish disease. But unlike whirling disease that only involves the Salmonidae family, this virus is a far more indiscriminate killer.­

­Something sinister appeared in a w­ate­r sample from Canada's Lake St. Claire in 2003. A strain of viral hemorrhagic septicemia (VHS) showed up for the first time in North American waters. Previously, the fish disease-causing virus was confined to Europe. Ships traveling across the pond probably brought it to the Western hemisphere. Since its discovery, VHS ha­s already infiltrated so many freshwater areas surrounding the Great Lakes (except for Lake Superior) that specialists fear that it will get into the Mississippi River.

VHS is particularly troubling because, unlike most fish-related viruses, it affects a wide variety of species. According to the National Parks Service, VHS has killed 28 different freshwater fish species since 2006; yet, more than 50 species may be susceptible to VHS [source: Minnesota Sea Grant]. The virus spreads most rapidly during the spring when fish spawn. Whenever fish populations live in close proximity to one another or are experiencing stress, VHS transmission rates spike as well. Fish send it around to each other through urine, feces, sexual fluids and consumption of infected fish [source: Whelen].

Once a fish catches the virus, it can lead rapidly to internal bleeding and hemorrhaging from open sores on its body [source: McKenna]. Mortality rates for infected fish fluctuate between 20 and 80 percent [source: Minnesota Sea Grant]. The virus has stricken the round goby fish population the hardest, but keystone fish species, such as bass, walleye and muskies, have also taken a hit.

Here's where the fishing bait issue arises. The states surrounding the Great Lakes have clamped down on fishing bait sales in an attempt to prevent VHS from expanding its reach. Fish contaminated with VHS that are used as bait could pass along the disease in new places. Even dead or frozen fish can contain the active virus. For that reason, bait dealers in the Great Lakes area must certify that the fish they use as bait are disease-free. If they aren't, fishermen can use that tainted bait only in freshwater areas that are known to be infected with VHS. In addition, bait sellers must provide fishermen with a receipt of where the fish bait came from.

Although the regulations are seen as a nuisance by some bait shops and fishermen, they don't restrict fishing activities. VHS kills fish, but it isn't a known human pathogen. That means that fishermen can still catch and eat VHS-infected fish without worrying that they'll get sick. However, if negligent fishermen contribute to VHS' expansion, there won't be many freshwater game fish left to catch in the coming years.

How Anglers Can Prevent the Spread of VHS

Should fisherman always catch and release?
What are greenhorns on a crab vessel -- and why are they called that?
How is a crab boat like a floating city?