by Jennifer Horton
Prev NEXT 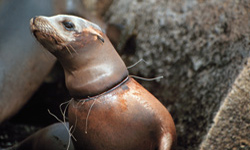 You may not necessarily own a boat if you fish, but it's a given that you own gear. The issues with fishing gear tend to occur­ after­ it's been used. Lost sinkers, often made of toxic lead, are especially problematic because they're easily mistaken for food by animals. A single lead sinker is enough to cause birds to become sick and eventually die [source: New York State Department of Environmental Conservation].

Ideally, fishermen should carry out all of their gear and retrieve any lost equipment. Even in cases when this isn't possible, you can at least rest easy knowing that your sinker won't do as much harm because you've purchased one of the many nontoxic alternatives available. There are even lures available made of fish food instead of plastic.

Discarded fishing lines also cause needless deaths. Animals like ducks, loons and turtles get tangled up in the line or swallow it, which can lead to starvation, strangulation or debilitating cuts. So the next time your poor casting causes your hook and line to become caught on a log, don't just abandon it.