by John Perritano
Prev NEXT
3 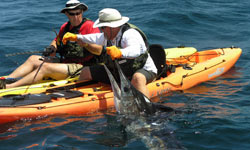 Who needs a boat when you can reel in a marlin from the safety and comfort of your kayak?
Photo by Jim Sammons and courtesy Kayak4Fish.com

Anyone who has seen the classic movie "Jaws" knows the unforgettable scene in which Roy Scheider who plays police chief Martin C. Brody, spots the film's nemesis, a great white shark, for the first time and says: "... you're gonna need a bigger boat." For extreme kayak fishermen, a bigger boat is not an option.

Extreme kayak fishing means fishing in a kayak for some of the most dangerous fish (in terms of size and temperament) on the planet, including sharks and marlin [source: White]. It's not easy. Catching a mammoth fish from a paddleboat can cause a fisherman to lose his or her balance and strength. It also means fishing for creatures that would like to have you for dinner. "Gulp!"

One of the sport's most extreme fishermen is Jim Sammons, a San Diego native. Sammons is the first and only kayak angler to get a marlin in California waters. He's also caught thresher sharks weighing up to 200 pounds (90.72 kilograms), tarpon up to 150 pounds (68.04 kilograms) and tuna up to 125 pounds (56.7 kilograms) [source: Sammons].