by John Perritano
Prev NEXT
5 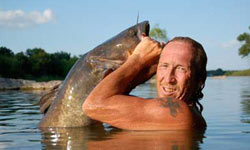 Forget fishing rods. When you go noodling, you use only your hands to "catch" huge catfish from the depths of the lake.
Photo courtesy Okie Noodling

Call it what you wish, noodling (my favorite), hogging or hillbilly hand fishing. Catching a catfish with your bare hands is a time well spent for some people. When French explorers Jacque Marquette and Louis Jolliet paddled down the Mississippi River in 1673, some gracious soul warned the pair of a "demon who would engulf them in the abyss where he dwelt." Mark Twain, whose own death was exaggerated, once claimed to see a catfish more than 6 feet (1.8 meters) tall and weighing 250 pounds (113.4 kilograms). "If Marquette's fish was the fellow to that one, he had a fair right to think the river's roaring demon was come," Twain wrote in "Life on the Mississippi" [source: Bilger].

Catfish like to hang near rocks and logs. They're bottom feeders, so they rarely swim to the top. A noodler will wade along the river bank, groping and probing the bottom with his hands. The goal, if you haven't already figured it out, is grab hold of the fish. Not by the tail. Not by its fins. They want to stick their hands down the fish's maw and haul it out.

Some noodlers will wipe their arms with rotting fish guts to attract catfish. Noodlers have to be careful. The demons of hollowed out logs and bridge pilings can grab hold of a person's arm and not let go.