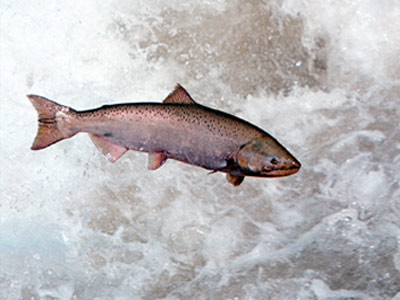 Sights like this one are becoming rare as fewer salmon make it back to their birthing grounds to spawn. See more pictures of responsible fishing.
Bill Schaefer/Stringer/Getty Images

The rivers and streams of the Paci­fic Northwest used to be so full of wild salmon that fishermen liked to say they could cross the waterways on the fish's backs. If salmon were the only means of crossing the rivers, those fishermen would be out of luck today. In California, Washington, Oregon and Idaho, salmon are extinct in nearly 40 percent of the rivers they were known to inhabit -- at least 106 major stocks gone forever [source: Northwest Power & Conservation Council].

Around the world, the story is much the same: Global Atlantic salmon catches fell 80 percent from 1970 to 2000. In the United Kingdom, one-third of the salmon population is endangered according to the WWF, and in California and Oregon, the Pacific Fishery Management Council recently announced the strictest salmon fishing quotas in the region's history due to the animal's rapid decline [source: Young, Environment News Service]

The downward spiral of the salmon population is troubling for several reasons. This fish is far more than just a tasty source of omega-3s. Salmon are what's known as a keystone species -- like the engine in your car, their physical presence compared to the whole is rather small, but their importance to its functioning is vital.

­Not only are the fish a main source of sustenance for a variety of predators (more than 137 species), but their decomposing carcasses are a significant source of nutrients and fertilizer for trees [source: Hunt]. When the salmon go, the surrounding ecosystem likely won't be far behind.

Unfortunately, there isn't an easy solution for reversing the decline in salmon populations -- everything from overfishing to El Nino and climate change have been linked to salmon depletion. The fish's complicated life cycle -- salmon begin life in a stream, migrate to sea for their adult life and finally return to their birthplace in order to reproduce -- makes it even harder to pinpoint the primary factors leading to each population's fall.

But researchers do know enough about the leading causes to label them with a nifty slogan. Keep reading to find out what the four Hs -- harvest, hatchery, habitat and hydropower -- are all about. 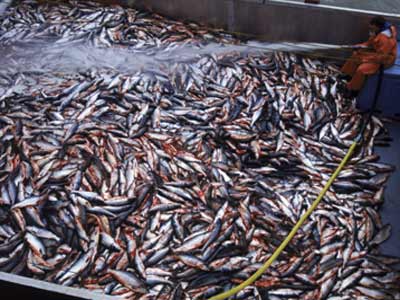 Catches like this one may not be possible in the future if overfishing continues.
Robb Kendrick/Aurora/Getty Images

While a variety of fact­ors impacts salmon population­s, four tend to stand out. Although there are only six species of salmon -- five Pacific and one Atlantic -- each individual stock, or population, is genetically unique and faces challenges specific to its region, making it difficult to label any one of the four Hs more important.

Two of the H factors are somewhat interrelated. The first one, harvests, refers to the commercial, recreational and tribal fishing of salmon -- either out at sea or as they migrate back upstream. Until recently, many governments have failed to put appropriate limits on the number of salmon that can be reasonably caught each year. For example, in Canada, when around 8 million salmon returned from the ocean to spawn in 1917, the government still allowed a catch of more than 7.3 million fish [source: Hume].

Overfishing has led to record low levels of the salmon almost everywhere they're caught. An exception is in Alaska, where well-developed management plans give sustainability a high priority.

­The severe salmon depletions prompted by overfishing have led to a subsequent increase in fish hatcheries, the next big H, to replenish the stocks. Initially created to enhance salmon numbers, these fish nurseries artificially raise young salmon until they're self-supporting and then release them into the ocean. Similar facilities now exist solely for food production and are referred to as fish farms.

Ironically, the hatcheries and farms that popped up to alleviate pressure on wild salmon populations are now endangering them. Research shows that situating fish farms near wild salmon populations can cause declines of more than 50 percent in the wild fish [source: Owen]. Both hatcheries and farms may introduce weaker genes into the wild population's gene pool through interbreeding, thus lowering salmons' chances for survival. In addition, the artificial structures are more conducive to parasites and disease, which then infect wild populations. Competition is also a factor.

Both harvest and hatchery problems can easily be fixed. With proper management and controls, populations can and do improve. Better quality fish cages, for instance, can prevent physical contact between the fish, and stricter controls on harvest quotas can help deter overfishing.

The next two Hs, also man-made, have to do with where salmon live.

You might think eating farmed salmon helps the wild ones, but wild-caught Alaskan salmon or Marine Certified Species (MCS) salmon is actually a better bet. By looking for the MCS label, you're ensuring the fish you eat comes from a sustainable source. Eating farmed fish simply encourages the harmful practices many fish farms engage in, which endanger the wild populations in the first place. If you do choose farmed fish, look for those that are farmed in open sea conditions and avoid using wild-caught fish as feed. 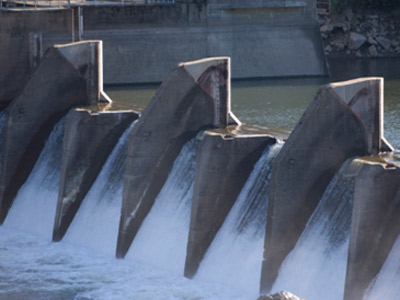 The health of salmon populat­ions depends a lot on the health of their living environment. The fact that salmon live in a variety of habitats throughout their lives makes them especially vulnerable to the next H -- habitat degradation. Even small disturbances can make a big difference, since spawning is highly sensitive to things like increased sedimentation. Logging, agricultural practices, trash dumping and oil spills all contribute to poor water quality.

Another factor that can disrupt habitat is the final H, hydropower dams. The Clearwater coho salmon, once abundant in the Snake River Basin of Oregon, Washington and Idaho, became extinct in the early 1960s largely due to the construction of a dam that blocked the fish's passage to and from its birthing grounds [source: Northwest Power & Conservation Council]. Besides potentially blocking access to salmons' habitats, dams may cause changes to water flows and temperatures that can devastate local populations.

Dams aren't necessarily a death knell for salmon, however. Researchers tracking salmon on the dam-laden Columbia River concluded it wasn't the dams impeding their survival but challenges they face at sea including predation, ocean warming and alterations to their prey distribution [source: Owen]. The study showed that with proper modifications to assist the salmon in their migration, dams and salmon can coexist.

The four Hs -- harvests, hatcheries, habitat and hydropower -- aren't problematic in and of themselves. It's only when they're mismanaged that things start to go downhill. While some populations have dropped so low they will take years to restore, if at all, others can be saved from following the path of the Clearwater coho.

Increasing evidence shows that climate change may affect salmon migration patterns. Warmer ocean temperatures cause the fish to migrate further north, creating a longer distance for them to travel than in cooler years. In addition to a delayed return to their spawning grounds, many of the fish experience reduced body size since more energy is required to cover the longer distance. Higher water temperatures may also cause increased stress and pre-spawning mortality for some species like sockeye salmon [source: Levy].