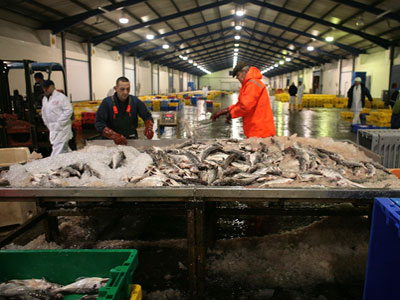 Before 1976, commercial fishing in­ the United States was pretty much a free-for-all. The result of this bonanza was that some areas of the ocean were overfished. Enter the Magnuson-Stevens Fishery Conservation and Management Act (MSA). One of the things the law established was exclusive fishing rights for a 200-mile (321,686-meter) zone around the United States border, to be managed by the U.S. government. That's a big area, so another thing the MSA set up were eight separate regional councils. These councils wrote management plans for their zones with the aid of data from the National Oceanic & Atmospheric Administration's (NOAA) National Marine Fisheries Service (NMFS). Each year, annual quotas are set for each fish species based on a stock assessment and fishery evaluation. When each quota is reached, the fishery is done for the season.

­The MSA has been changed a couple of times since 1976. The first time was in 1996 with the addition of the Sustainable Fisheries Act (SFA). The SFA sought to strengthen the original act by strengthening catch-and-release programs, developing lesser used fisheries, better protecting fish habitats and reducing bycatch. Bycatch is species of fish that get caught up in the net even though the vessel isn't permitted to catch that particular kind. The success of the SFA was challenged by marine ecologists after a five year study in 2001 concluded that most fisheries were virtually unaffected by the act. A lack of oversight and government red tape is usually blamed for the lack of enforcement.

After the criticism of the SFA's effectiveness and subsequent findings concerning the depleted stocks of certain fish species, the U.S. government acted again with the MSA Reauthorization Act of 2006. This act was tied to President George Bush's Ocean Action Plan and has four main objectives:

Whether the Reauthorization Act meets a similar fate as the SFA remains to be seen.

Bottom trawling is a fishing method that's been under fire from marine ecologists in recent years. It involves a boat dragging a large trawl, or net, along the sea floor, scooping up everything in its path. It's so damaging to the ocean's ecosystem that the United Nations Secretary General reported in 2006 that 95 percent of damage to seamounts (or underwater mountains) around the world is caused by the practice. Large, heavy trawling nets kill sponge, coral, fish and other bottom dwellers of the ocean. They dig up such a storm of sediment that the path can be seen from outer space. The United States has banned the method for the deep seas around Alaska and areas in the Mediterranean Sea and the South Pacific. In 2006, the United Nations began a push to ban bottom trawling in 45 percent of the world's oceans.