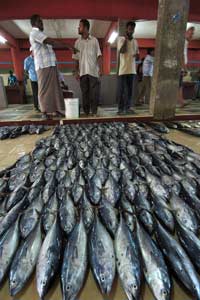 According to a 2008 press release from NOAA, the fisheries in the United States contribute approximately $35 billion a year to the economy. An additional $20 billion comes from recreational fishing.

Globally, it's even more impressive. The FAO's report on the state of global fisheries and aquaculture said that capture fisheries -- another name for wild fisheries -- generated more than $84.9 billion in 2004. Aquaculture of fish stocks created an additional $63 billion in revenues. Not bad for a fishy business!

But there are still some major problems with the fishery industry worldwide. The FAO estimates the world fishing fleet at around 4 million units. Of those units, 2.7 million are open water boats (the rest are stationary facilities, most of which are in Asia). According to the FAO and other experts, the fleet is far too large. In fact, in an article for National Geographic, journalist Fen Montaigne goes so far as to say the fleet is nearly twice the size it needs to be.

Some governments have tried to reduce the size of their respective nation's fleets. China instituted a program designed to reduce its own fleet by 7 percent. The government provided incentives to fishermen to retire their boats. The measure was completely voluntary and appealed mainly to fishermen with smaller operations.

Why worry about the size of the fleet? It has an impact not only on overfishing, but also on the economy. Back in 1992, the FAO estimated that the global revenue generated by capture fisheries was $70 billion. But the cost of operating and maintaining the global fishing fleet amounted to $85 billion. That meant the entire fishing industry, when viewed from a global perspective, was operating at a loss [source: Somma].

Why is the fleet so large in the first place? Part of the reason is that the fishing industry generates a lot of money. Another is that many countries offer subsidies to fishermen. Over the last decade, several countries have begun to cut back on subsidies as a way to address the fleet's overcapacity issue. According to a report from the U.S. Director for Trade and Environmental Policy Planning, governments around the world spend between $10 billion and $15 billion on subsidizing the fishing industry. Organizations such as the FAO and the World Wildlife Fund (WWF) have called for the complete elimination of subsidies as part of a strategy to revitalize fish populations and reduce the strain on the environment.

It's important to remember that fishing is a global industry. For instance, fish caught in the Mediterranean Sea may end up on the table in a fancy sushi restaurant in Japan. If one nation offers high prices for a certain kind of fish, it's a safe bet that hundreds of fishermen will compete to meet the demand. Government regulation and enforcement may be the only way to keep the industry from spiraling out of control.

In the end, restraint benefits everyone. The fishing fleet will put less stress on the environment. Fish stocks will have the opportunity to reach a sustainable population. Fishermen will still be able to make a living harvesting fish. And you'll be able to enjoy a tasty tuna tartar. But the world's fisheries still have a long way to go before we can relax.

To learn more about fisheries and other topics, plot a course for the links below.