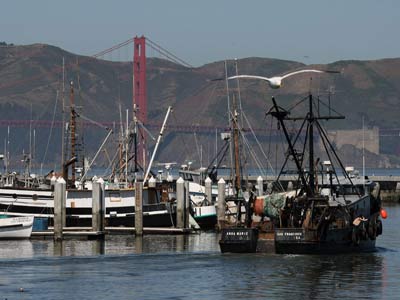 To determine if a particular stock is in danger, the NOAA takes the estimated biomass of the stock (B) and divides it by the biomass of the maximum sustainable yield (BMSY). After multiplying this figure by 100, you get a percentage of the current biomass compared to the ideal one. The equation looks like this:

The NOAA relies on the Fish Stock Sustainability Index (FSSI), which says that 80 percent or more is within the threshold of sustainability. A lower percentage is an indicator of overfishing.

Just a sample of the fish stocks that the NOAA says are overfished include:

It's important to remember that most commercial fishermen want to avoid overfishing as much as environmentalists do. They rely upon fish stocks to make their living. But the cycle of overfishing is self-perpetuating. We'll use bluefin tuna as an example.

Bluefin tuna is a very popular fish and commands a high market price. Because it's so valuable, some fishermen will capture more fish than their legal allotment in order to cash in. However, the price drops as the supply of bluefin tuna to the market increases. In order to make the same amount of money as before, fishermen have to capture even more bluefin tuna to make up the difference. Before long, the fish stock can become irreparably depleted.

One way to limit overfishing is to institute a catch-share quota system. Under some quota systems, a fishing boat has a specific limit to the number of fish it can harvest during a season. There's no incentive to rush out and gather as many fish as possible. Sometimes, fishermen are allowed to trade or sell fishing permits, which can increase or decrease the individual boat's quota. Fisheries may choose to auction off quotas to the highest bidder.

Some fishery organizations have strict weight and size requirements for caught fish. Any fish under those limits cannot be sold at market. The purpose for these requirements is to give juvenile fish the chance to mature and produce offspring.

Another way to alleviate overfishing is to rely on farmed fisheries. We'll take a closer look in the next section.