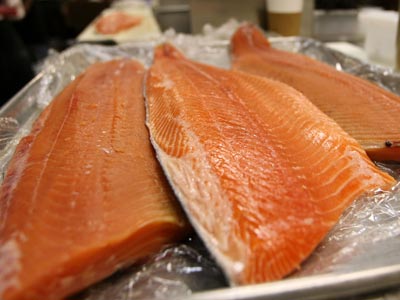 Wild fisheries refer to ­geographic regions rather than organizations or structures. The two broad categories of fisheries are marine (or saltwater) fisheries and freshwater fisheries. There ­are three major kinds of fishing: subsistence, commercial and recreational fishing.

Let's look at marine and freshwater fisheries in turn. The United States organizes marine fisheries by geographic regions. Those regions include:

The United States defines the commercial fishing region of marine fisheries for most of the country as between 3 and 200 miles (5 and 322 kilometers) off the U.S. coast. The only exception is the region off the coast of Texas and western Florida, which extends from 9 to 200 miles (15 to 322 kilometers) offshore [source: NOAA]. Each region has its own regional office in charge of monitoring fish populations, fishing activity, fishing regulations and regulation enforcement. These offices report to NOAA. The offices partner with fishermen, scientists, environmentalists and law enforcement to ensure the integrity of fish stocks and the environment.

Each region has its own fish management plan (FMP) for each fish stock or stock complex. This plan takes multiple factors into account. The end result is a series of regulations that tell fishermen when and where they can fish as well as how much fish they can harvest during a season. There are many different ways to regulate the number of fish a fisherman is allowed to catch -- we'll take a closer look later on.

As for freshwater fisheries, each state has its own office that oversees fishing activity within that state's waters. Laws, regulations and enforcement vary from state to state. If you plan on spending a quiet day at the lake with rod and reel, you should look into your local laws and regulations first. You will need to apply for a fishing license and there could be strict limits on the kind of fish you are allowed to catch and keep.

Wild fisheries around the world are in danger of deteriorating for many reasons, including damage from pollution, environmental disasters and climate change. But the biggest threat to many fisheries comes from overfishing. We'll take a closer look at this threat in the next section.

Why does NOAA group some fish stocks together into stock complexes? Usually, it's because fishermen harvest fish from both fish stocks at the same time.