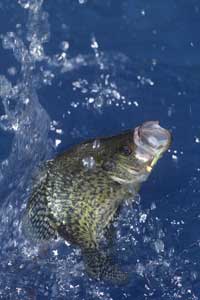 Panfish, like this black crappie, are the most frequently caught type of fish in North America.
Wally Eberhart/Getty Images

After spending the day on the water with a fishing pole in hand, there's nothing more satisfying than enj­oying the fruits of your labor at the dinner table. Once you're done cleaning and filleting your catch, you listen to that satisfactory sizzle of fresh fish in the frying pan. An appetizing scent wafts from the stove, and your mouth waters in anticipation of the first bite.

What type of fish is cooking? If you've been trying your luck in North American freshwater sources, chances are it's a kind of panfish. Panfish is a general term used to describe freshwater fish that are small enough to fit in a skillet. It may seem like bigger is always better in the fishing world, but petite panfish are popular catches since they make for tasty meals. Thanks to that and their vast quantities in the water, anglers (people who fish with rods and reels) hook more panfish than any other type of fish. In fact, anglers in Wisconsin caught more than 57 million panfish in the 2006-2007 fishing season [source: Wisconsin Department of Natural Resources].

Many times, when you hear people talking about panfish, they're referring to the hand-sized fish within the sunfish family. Members include bream, bluegills, crappie and perch. You can find these fish species year-round, ranging from the eastern United States to western states like Colorado. They thrive in almo­st every freshwater habitat, swimming along in streams, ponds and large lakes. In addition to filling the bellies of thousands of fishermen, panfish are also food sources for predatory fish. Largemouth bass in particular prey on bluegills, which are one of the most abundant species of panfish. The basses' predation keeps the fast-growing bluegill population in check.

Living off of minnows, insects, worms and other invertebrates, panfish rarely grow more than 10 inches (25 centimeters) long or weigh more than a few pounds. However, their diminutive size doesn't come without an eager appetite. Panfish are some of the easiest fish to snag because of their greedy feeding behavior. You can leave your fancy lures at home since they'll readily gobble up worms or bugs at the end of your line. But while anglers catch hundreds of millions of panfish in the United States every year, fishing activity actually helps boost their population numbers. 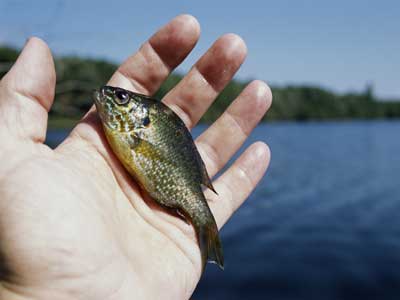 Why was Alaskan fishing named the most dangerous job in the world?
Do fish feel pain?
What's depleting salmon populations?