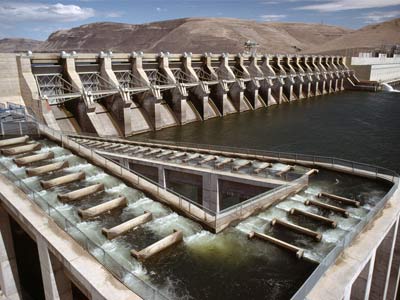 A fish ladder built around a dam in the Pacific Northwest.
Harald Sund/Photographer's Choice/Getty Images

A lot of work goes into designing­ a fish ladder. The height and grade between the pools, the number of pools, the size of the pools and water flow are but a few of the factors that have to be considered. And fish ladders aren't one-size-fits-all -- each has to be tailored for the type of fish that will be using it. For example, trout and salmon have the talent for powerful bursts of swimming speeds, which means they can swim against stronger currents of water that other species can't [source: Michigan Department of Natural Resources]. Yet you can't make the water flow too weak, as a meager trickle won't attract the fish to the passage entrance.

There are, however, some basic designs for fish ladders that can serve as a blueprint:

Fish ladders aren't foolproof, however. Sometimes fish have trouble finding the entrance, and sometimes, long fish ladders exhaust the fish, preventing them from reaching the top [source: Bailey]. Additionally, while fish ladders are designed to get the fish back upstream to the spawning grounds, there may not be protection for the young fish going downstream. Without built-in protection, the young fish could get caught in a turbine, for example, leading to injury or even death.

Because fish ladders aren't always effective, some interest groups believe that dam removal is a better alternative than constructing a passage. Removal isn't always an option, particularly if the power produced by the dam is vital to existing infrastructure, but a few communities have found that removing a useless dam is less expensive than building a fish ladder.

Let the "Next Page" button be your passage to many other fish articles you may find interesting.