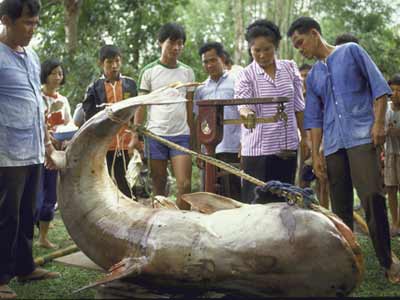 Hungry? Many favor the meat of the Mekong giant catfish, but others say it's overrated.
Robert Nickelsberg/Time Life Pictures/Getty Images

The Mekong giant catfish is an impr­essive sight, but one that is rapidly vanishing from the wild. Although the exact number is unknown, some experts estimate the adult Mekong giant catfish population is limited to just a few hundred fish -- down some 95 percent over the course of the past century [source: National Geographic]. The species is listed as critically endangered by the International Union for Conservation of Nature and Natural Resources (IUCN). The only levels worse than critically endangered are extinct in the wild and just plain extinct.

Although a naturally rare species to begin with, historically, Mekong giant catfish were caught in huge numbers. Hundreds, perhaps even thousands, were harvested each year and the fish have long been highly revered in many Southeast Asian cultures -- ancient cave paintings can attest to that [source: Mitchell]. Today, however, those numbers are way down. Some years a handful are caught, in others not even that. The IUCN red list entry on the Mekong giant catfish, last officially updated in 2003, estimates that between 1990 and 2003, the wild population decreased by more than 80 percent [source: IUCN].

Researchers believe several factors could be linked to the dwindling numbers. Similar to the tales of other species disappearing from the planet in droves, overharvesting and habitat loss/degradation are big factors. Mekong giant catfish meat is prized by many societies in Asia, so they're an extremely popular catch. Habitat issues occur in part because the catfish are migratory, spawning far from their traditional feeding grounds. Several damming projects have sliced through these migration routes -- shrinking the catfishes' habitat and possibly isolating different genetic populations. Deforestation and dams upriver also affect the water level, temperature, silt level and flow pattern of the mighty Mekong.

Take heart, however. There's some good news on the horizon because many aquatic advocates haven't given up hope. Nowadays, awareness, research and educational campaigns are accompanied by incentives like buy-and-release programs that help assess the surviving population and compensate fishermen for letting the catfish they catch go free. But keep in mind, while awareness is increasing, the many miles of the Mekong make it difficult to patrol every village to verify compliance where protective laws are in place. Similarly, suggestions for projects to improve river navigation and construct additional dams continue to be tossed about.

Because of overfishing and because the catfish take many years to reach sexual maturity, researchers are hoping the wild population will be able to rebuild itself, given enough time. In order to serve as a safeguard in case they're not able to recover naturally, breeding efforts have been going on since the early 1980s -- although at this time, the vast majority of the captive-bred populations are not being released into the Mekong to mingle. Only in the event the Mekong giant catfish does become extinct in the wild will these stocks be reintroduced in their place.

Careful river management helps, yet many believe a broader multinational effort is needed to save the endangered species of the Mekong River. Initiatives like the MegaFishes Project and the IUCN's Mekong Wetlands Biodiversity Programme are among the many working hard to bring these elusive leviathans back from the brink. The Mekong giant catfish has been called a flagship species, able to draw attention to the striking need to preserve the health and biodiversity of the Mekong River, which millions of people rely on for their livelihoods and their lunches.

On the next page, you can get links to other HowStuffWorks articles on other fishing topics.