King of the Catfish: How Big Do Catfish Get? 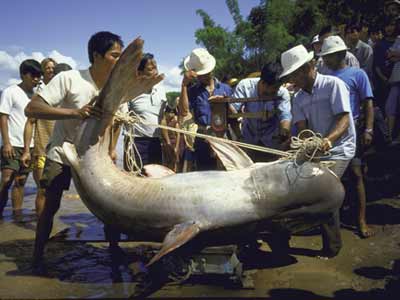 Imagine swimming alongside this Mekong giant catfish, which was caught in the Mekong River in 1986.
Robert Nickelsberg/Time Life Pictures/Getty Images

Not only is the Mekong giant catfish one of the world's largest freshwater fish, surprisingly it's also one of the fastest growing [source: Mattson]. While you might na­turally assume their massive growth occurs gradually as they age, especially considering these catfish have an average life span of more than 60 years (assuming nothing nefarious interferes), that's not the case [source: National Geographic].

Mekong giant catfish are commonly cited as having a maximum size of 3 meters and 300 kilograms (approximately 10 feet and 660 pounds). But in what's got to be the growth spurt to end all growth spurts, Mekong giant catfish hatchlings (called fry) that have been bred in captivity have averaged a 400 percent growth rate in a mere 4 months. When born in natural habitats, by the time the fish are three to five years old, they reportedly weigh about 330 to 440 pounds (150 to 200 kilograms) [source: Mattson].

These catfish manage to grow to such enormous sizes through a number of evolutionary tricks. We'll start with when the catfish are fry. Although full-grown adult Mekong giant catfish lack dentition and barbels (teeth and whiskers), not so with the fry. The next stage has only been observed in captivity, so there's no way to know if this happens all of the time. But once hatched, fry turn cannibal and use their little chompers to gobble up as many siblings as possible. Although their teeth usually say sayonara by day 11, the fry are off to a good start [source: Philadelphia Natural Academy of Sciences].

With this tasty meal under their belts, they continue to eat. And eat. And eat. These fish have voracious appetites, and this is a habit they tend to keep up throughout their lives -- although after about a year, they switch over to an herbivore lifestyle [source: Mattson].

You might be wondering: Everyone gets full sometime, so how can they keep up such a heavy feeding schedule? Although mature Mekong giant catfish grow less slowly after their initial spurt, they still love to chow down and they can accommodate this avid appetite with an expandable abdomen and digestive tract.

On the next page, we'll check out the conservation status of Mekong giant catfish and find out what's being done to preserve them.

Cat Got Your Tongue?

You might relish the sight of catfish on your dinner plate, but have you ever thought about catching one yourself? By hand? If thoughts like those have swum through your head, then noodling might be the perfect new hobby for you. Find out about this in the article How Noodling Works.