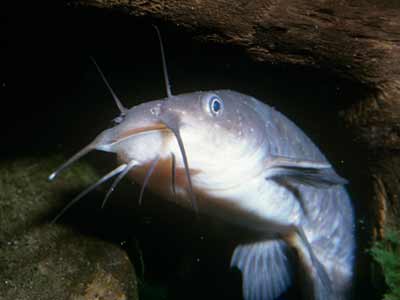 This little guy has some pretty impressive barbels, but he'd have to really pack on some pounds if he wanted to be in the running for a spot in the Guinness Book of World Records.
David Wrobel/Visuals Unlimited/Getty Images

There are nearly 2­,900 species of catfish in existence today, most inhabiting freshwater environments. Distributed almost worldwide, catfis­h are bottom dwellers who share some important characteristics. You won't find catfish covered in scales -- most are smooth-fleshed although some do have bony plates across their bodies. At some point during their lives, all sport a minimum of one set of those trademark whiskers (known as barbels), which act as feelers

At maturity, catfish come in a wide range of sizes. Some little guys can be as tiny as 1 1/2 to 2 inches long (that's about 4 to 5 centimeters) [source: Encyclopedia Britannica]. Others can grow to absolutely mammoth sizes; they're definitely contenders for the title of world's largest freshwater fish. But while there are species of catfish around the globe that can grow to extraordinary lengths, only one can claim the heavyweight crown -- the Mekong giant catfish. The largest ever officially recorded was about 8 feet 9 inches long and just a sliver under 646 pounds (that's 2.7 meters long and 293 kilograms for the metric folks) [source: Owen].

That particular fish, captured in Thailand in 2005, put up a fight for more than an hour before the team of fisherman attempting to haul it in finally prevailed. The goal was to harvest the eggs so they could be raised in a conservation program and then release the fish, but the behemoth didn't survive the struggle. On a later page, we'll find out more about why those eggs were so prized, but first let's pause for a moment to take a closer look at where the catch occurred.

­The Mekong River flows through southeast Asia, and the entire river system totals about 3,000 miles (or 4,800 kilometers) in length. The Mekong river basin covers close to 495,000 square miles (about 795,000 square kilometers) of land [source: Mekong River Commission]. The Mekong River starts its journey by pouring down from the Tibetan Plateau, and the river's basin encompasses parts of China, Vietnam, Myanmar, Thailand, Laos and Cambodia, helping define a good portion of the national borders in that part of the world.