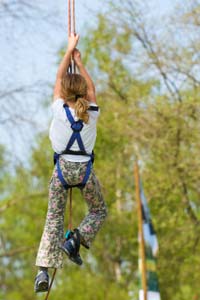 Make those knots tight, or it could mean a nasty tumble.
©iStockphoto.com/ArtisticCaptures

Once you have some rope and a couple of carabineers, it's time to practice knot-tying. Fundamental to recreational tree climbing, tying knots is a skill enthusiasts need to master or they risk life and limb on an ascent.

There are about a million different types of knots out there for ambitious outdoorsy types to tackle, but luckily, climbing doesn't require that level of know-how. Before we run through some of the common examples, let's cover one of the most basic climbing questions that'll help you determine the type of setup you'll need to prepare: Whether you'll employ the doubled rope technique or the single rope technique.

The doubled rope technique is the more commonly practiced of the two. The rope is slung over a branch and both ends are used during the course of the ascent and descent as a pulley system, along with a series of knots. Basically, you're creating a loop and adjusting its length to move you up and down.

With the single rope technique, one end of the rope is knotted securely at the base of the tree while just the other is used for climbing, with the help of mechanical devices like ascenders and descenders. Both of these strategies have advantages and disadvantages, so an instructor can help you determine which is best for a specific circumstance.

Whichever you choose, knots will still perform lots of key roles during the climb, from anchoring your rope to the tree to attaching your harness to the rigging. Different instructors tend to favor different knots, but here are some examples of the many knot names you might hear flying around during a training course: bowline knot, buntline knot, butterfly knot, Blake's hitch, distel hitch, clove hitch, monkey's fist, marl, prusik, sheet bend and on and on. That's not even the end of it though -- many knots come in variations, and the difference between them is crucial. Tying a knot one way can make it sturdy enough to bear your weight, but tying it another way… not so much. You can see why it's important to know your knots.

We'll get into more safety considerations on the next page.