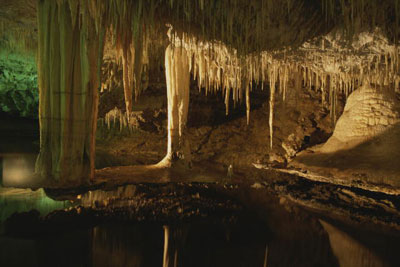 Caves like this one in coastal Australia are formed over long periods as water eats away at the limestone underground.
Sam Abell/National Geographic/Getty Images

A cave is any kind of natural, hollow, underground passage or enclosure with an opening to the surface. Caves are most commonly found in what's called a karst landscape, characterized by sinkholes, substantial underground aquifers and active subterranean drainage. Around 20 percent of the United States qualifies as karst [source: National Caves Association].

Educational signs in Virginia's Luray Caverns remind visitors that stalactites build downward from the ceiling and stalagmites build up from the floor of a cave. A good mnemonic device: Stalactites cling "tight" to the roof.
Alan Band/Fox Photos/Getty Images

Stalactites (the ones that hang down) and stalagmites (the ones that point up) are the best-known examples of speleotherms, also called cave formations. There's an astounding variety of speleotherms, some with oddly descriptive names like fried eggs and bacon. When carbonic acid eats away at limestone, it creates the mineral calcite, which is then carried by rainwater into the cave. When this rainwater drips onto the floor of a cave, it very slowly deposits bits of calcite until a stalagmite is formed. Other speleotherms are formed by calcite being precipitated in brilliant patterns and crystalline formations on cave walls, ceilings and floors.

There are three different classifications of animals that live in caves:

Cave conditions vary dramatically depending on how the cave was formed and where it's located. Some caves are wet and muddy; others are dry and dusty. The temperature of a cave is very stable. It's always the average annual temperature of the surface above the cave [source: National Speleological Society].

But why would anyone want to crawl around in a big hole in the ground? Read on to find out.

If the word spelunking sounds like a punchline, that's because it is. The word for the scientific study of caves is speleology and those who practice it are speleologists. The English word "spelunk" (meaning cave) was last used back in the 16th century, but somehow -- possibly because it sounds ridiculous -- the term got revived in the 1940s to describe the decidedly non-speleological act of scrambling around in a cave for fun. Nowadays, serious cavers use the word "spelunker" to describe unsafe or otherwise untrained cavers. [source: World Wide Words]