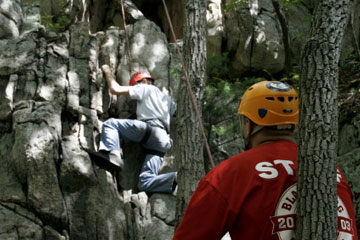 Image Gallery: Extreme Sports If you're a gumbie looking to brush up on your terminology, look no further. See pictures of extreme sports.
Photo courtesy of Blacksburg.gov

Are you a gumbie looking to traverse a face without placing bolts? Are you adept at crimping and able to dyno when the problem calls for it? Got your camming device on you?

If you know what any of this means, you're probably not a gumbie, a newcomer to the sport of rock climbing. But there are quite a few of them out there. The activity's popularity has exploded, now boasting about 9 million enthusiasts in the United States alone [source: ScienceDaily].

Like any sport, rock climbing has its own set of jargon to learn as you get involved. Climbing boasts dozens of sport-specific terms an outsider might not be familiar with. Here, we'll define 11 of the most common terms, with a sampling from climbing types, climbing gear and climbing moves.

Aid climbing -- A type of climbing in which the climber uses devices that alter the rock face, such as bolts or hooks, to assist in the ascent.

Anchor -- A natural or man-made structure (tree, bolt or cam, for instance) that holds the belay.

Belay -- A rope setup that catches a climber who falls, typically guided by a second climber.

Biner -- A small metal oval that opens and closes to hold multiple devices together; short for carabiner.

Bouldering -- Climbing a small rock, usually less than 30 feet (9 meters) high and typically without a rope.

Cam -- A protective device that retracts to be inserted into a crack and then expands to grip it.

Crimp -- Establish a hold by pressing the fingertips into the rock and raising the knuckles.

Dyno -- Jump across the rock face to reach the next hold, temporarily losing all contact with the rock.

Deck out -- Fall off the rock and hit the ground.

Elvis -- A leg that shakes uncontrollably, often due to exhaustion or nervousness.

Free climbing -- A type of climbing in which the climber uses no assistive devices for the ascent; it's just the climber and the rock, and a protective device, like a rope, only in case of a fall (no-rope climbing is free soloing).

Traditional climbing -- A type of climbing in which the climber uses non-altering devices, such as cams and slings, to aid in the ascent.

So remember: Make sure you brush up on your terminology before heading out with more experienced climbers who use the jargon. Nobody wants you decking out.

For more information on rock climbing and adventure sports, look over the links on the next page.