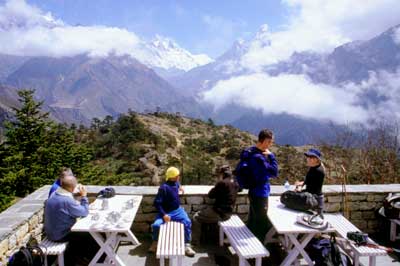 Since Nepal ranks among the poorest countries in the world, tourism is a vital economic lifeline. Comprising about 4 percent of the country's gross national product, the industry pulls in around half a billion dollars annually [source: CIA World Factbook]. Although the country has a rich culture and religious tradition, the best-paying and longest-staying tourists travel there for the rock star of the Himalayan mountains -- Mount Everest.

Although only slightly larger than the state of Arkansas [source: CIA World Factbook], the Himalayas that curve across the length of Nepal are home to eight of the 14 tallest mountains on the globe. The government takes advantage of this fact because when it comes to Everest -- or Sagarmatha in the native tongue -- people are willing to shell out serious dough.

What do these dollars mean for Nepal? Steady income. Mount Everest climbers have been a dependable money source, travelling to the country despite the decade-long Maoist uprising of mostly rural farmers who followed an Asian strand of Marxism, which came to a cease-fire in 2007. In climbing season alone from March to May, the population of the Khumbu region at the base of Mount Everest soars from around 40,000 to 700,000 [source: McDougall].

But thousands of those seasonal residents are Nepalese workers from other areas who migrate in for tourism-related employment. In fact, locals have decried recent calls for Mount Everest to be restricted due to environmental damage because so many rely on tourism to provide a majority of their annual income. For example, sherpas, or mountain guides, in particular can make upwards of $2,000 per expedition, far exceeding the average Nepalese annual income.

Just how much are people paying for a glimpse or a hike up Mount Everest? Go to the next page for glimpse at the cost to visit the roof of the world. 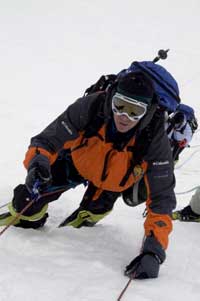 The easiest way to get a grip on how much money Nepal takes in from tourism is to take a close look at what the Everest tourist spends. You might be surprised how quickly the numbers climb.

If you're one of the 25,000 annual Everest tourists, getting into Nepal for more than a three-day stay will only run you $30 [source: Nepal Tourism Board]. But that's just the beginning of the tab. If you want to climb one of the major Himalayan mountains, you need a government-issued climbing permit. Although you can hike more than a hundred of the smaller peaks for free, who wants to play in the sandbox when the beach is next door?

Now that you've got your permit, you're ready to start climbing, right? Not quite. If you want to take the most common route to the top of Everest, you'll owe the Nepal government a $25,000 royalty fee for yourself or up to $70,000 for a seven-person expedition crew [source: Nepal Mountain News].

Can't afford it? Wait until the off-season. To increase Everest tourism during the colder months of the year, the Nepalese government announced in 2007 that it was trying to cut royalty fees for people interested in climbing Everest during fall and winter. If the proposed plan goes into effect, a September through November climb will be 50 percent off the regular price and one from December to February will be 75 percent lower. If you're lured into the sales price, Nepal winds up raking in off-season tourism money.

Once you get to the Khumbu region, there are other expenses as well, such as lodging, food and any additional supplies that aren't covered in your expedition fees. In addition to trekking businesses, more than 300 hotels and lodges have sprung up from the tourism, many of which are owned by the local Sherpa people [source: Reid and Kendrick]. Some people turn their homes into tea houses, or overnight lodging, for tourists who want a more "authentic" Himalayan experience. Hundreds of Nepalese men from other areas swarm into Khumbu as well, hoping to get work as porters on expeditions, hauling trekking equipment up Everest slopes on their backs. Even the high-altitude Buddhist monasteries draw income from passing tourists.

However, tourism carries its own price as well in the form of environmental destruction. Read on to learn about the environmental repercussions of Mount Everest tourism.

From Nepal, with Love

Here are some tips from the Nepal Tourism Board to help you follow the country's customs: 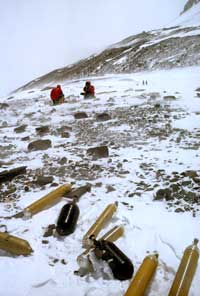 As you can see, Mount Everest tourism has created a difficult puzzle for Nepal. While it's a reliable source of income for some of the poorest people in the world, its very success could also be paving a path to its destruction. For more information about Mount Everest and Nepal, go to the links on the next page.