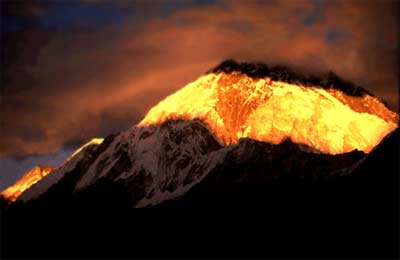 Following the successful summit in 1953, more and more climbers began to come to Everest, intent on emulating the first climbers. This flood of visitors brought an influx of cash as well as infrastructure to Sherpa communities. There are now schools, hospitals, and stores selling Western goods and food. With the visitors came increased deforestation for firewood, as well as a great deal of litter.

Like most alpine areas, the Himalayas are ecologically fragile. Hundreds of climbers travel to the area each year in the hopes of summiting Everest, but an additional 25,000 Everest tourists visit the area as well. Today, climbers, locals and the Nepalese government are all working to protect the environment around Everest.

In 1976, Everest and the surrounding area were designated as Sagarmatha National Park. In 1979, the area was made a Natural World Heritage Site. Currently, flora and fauna in the park are protected and the collection of firewood is prohibited.

In 1998, a private team calling itself the Everest Environmental Expedition removed 1.2 tons of waste from Everest, collected primarily around Base Camp and Camp II. While plastic bottles and empty oxygen canisters are unsightly, batteries, spent fuel cylinders, and human waste actually pose a greater environmental risk and the expedition focused its efforts on these types of litter. Other environmental expeditions continue the effort to clean up Everest.

The Nepalese government now requires a $4,000 deposit from climbers that it refunds only if they bring down the same amount of gear and supplies that they took up.