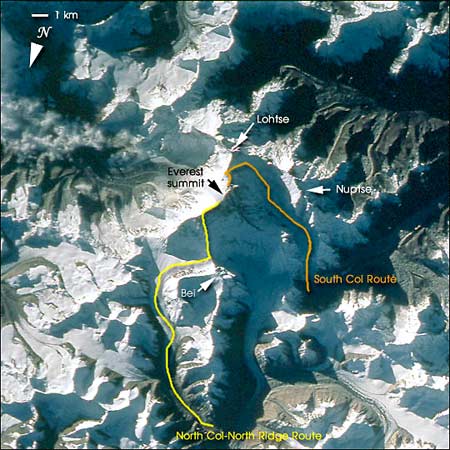 The two most common routes up Everest: the South Col and the North Col-North Ridge
Image courtesy NASA

Most climbers attempt Everest during April and May. In the winter, low temperat­ures and hurricane force winds make climbing difficult. Between June and September, summer monsoons create intense storms and violent precipitation.

From home and back again, most trips to the top over Everest take about two and a half months. For a southern approach, climbers typically fly into Katmandu and spend several days there buying supplies and arranging travel visas. From Katmandu, they fly to Lukla and make their way overland to Base Camp, where they prepare for their Everest climb. Even the Base Camp is located at high altitude, so the journey there must progress gradually, usually taking one to two weeks.

The South Col Route was taken by Sir Edmund Hillary and Tenzing Norgay and is still the route used most frequently. It goes through the treacherous Khumbu Icefall and Western Cwm (pronounced "coom"), up the Lhotse Face and past the South Col and Hillary Step to the summit.

The North Ridge Route is the second-most popular route. It's a more difficult climb technically and requires a longer descent at high altitude than the Southern Route, though it avoids the dangers of the Khumbu Icefall. In total, there are 15 different routes and route variations to the top of Everest.

Ascending from the south, climbers make use of five different camps as they adjust to high altitude. Base Camp is located at 17,600 feet (5364 m). Temperatures tend to be about 1.5 degrees C warmer than the summit per 150 meters of altitude drop and range between 17 C below zero in January to 3 C below in the summer. During the spring climbing season Base Camp houses about 300 people, including climbers, Sherpas, doctors, scientists and other support staff.

Travel from Camp I to Camp II at 21,300 feet (6492 m) takes climbers through the glacial valley known as the Western Cwm. Surprisingly, the main challenge in the Western Cwm is heat. The valley's structure means there is little wind and the intense sunlight at such a high altitude can make it uncomfortably hot.

Camp I in the Western Cwm
Image courtesy Alan Arnette

Camp IV, also known as the South Col ("Col" is a word for saddle, or pass) is the last major camp before climbers make their summit push. Located at 26,000 ft (7925 m) it is the first night most climbers spend in the Death Zone.

From Camp IV, climbers hike to The Balcony, at 27,700 ft (8440 m). The Balcony provides a platform where climbers can rest. From there they proceed to The Cornice Traverse, a horizontal face of snow and rock that must be climbed, and finally onto The Hillary Step which is climbed with fixed ropes, so that only one climber can ascend or descend at a time. At this point, the lack of oxygen and cold dulls climbers' reflexes and judgment, making the Hillary Step one of the most challenging elements of the climb.

From the Hillary Step, climbers must trek the final feet to reach the summit. Near the top are survey and scientific equipment, prayer flags, discarded oxygen bottles, and a few other small items and mementoes left by climbers. From the summit, you can see across the Tibetan Plateau, towards the other Himalayan peaks of Cho Oyu, Makalu and Kanchenjunga. Most climbers stop to take some pictures and enjoy the 360 degree view before heading down again. As the list of deaths attests, getting down safely can be at least as dangerous as getting up.

Most climbers require about four days to ascend Mount Everest from Base Camp. The fastest ascent from the north side is held by Hans Kammerlander of Italy and took him 16 hours and 45 minutes from Base Camp. The fastest ascent from the South took just under 11 hours and was accomplished by Lakba Gelu Sherpa. Babu Chiri Sherpa, who was at the summit for 21.5 hours, holds the record for the most time spent on top of Everest. However, people typically spend about an hour at the top on average.

If you’d like to climb an icy peak but aren’t experienced enough to do it, you can always practice in an indoor ice climbing facility.

Next, we'll look at the effect that climbing Mount Everest has on the region and on climbers themselves.

Early Everest pioneers concluded that summiting Everest without supplemental oxygen would be impossible. When Edmund Hillary and Tenzing Norgay climbed to the summit in 1953, they did so with the aid of bottled oxygen. This became the standard approach and continued until 1978, when Reinhold Messner and Peter Habeler reached the summit without it. Two years later, Messner accomplished the same thing alone, this time reaching the summit from the north side. Since then, more climbers, including Ed Viesturs, have climbed Everest without supplemental oxygen.

In his book, "Into Thin Air," Jon Krakauer was critical of the decision of a guide not to use bottled oxygen, fearing that without it, his function would be impaired and he would be less able to assist fellow climbers on his team. Others in the mountaineering community disagree, believing that some climbers are able to function adequately without it. However, most Everest climbers still make the decision to use supplemental oxygen.