Junko Tabei, the first woman to reach the summit of the world's tallest mountain, has died at the age of 77 in her native Japan.

Forty-one years ago, when she was 35 years old, Tabei climbed Mount Everest. She conquered the 29,028-foot (8,848-meter) mountain as part of a 15-member all-woman hiking party (the six Sherpas accompanying the party were men). She reached the summit of the world's tallest mountain on May 16, 1975.

In this picture from June 3, 1975, you can see what someone looks like two weeks after climbing the tallest mountain in the world.
Keystone/Hulton Archive/Getty Images

Not only was Tabei the first woman to reach Everest's peak, she was also the first woman to join the Seven Summits club — climbing the highest mountains on all seven continents. The Japanese climber accomplished that goal in 1992, predating modern hiking conveniences like GPS and emergency cell phone calls.

It wasn't just mountains that Tabei tackled; she also bucked cultural norms. In 1969, she founded the Ladies Climbing Club, an organization whose motto was "Let's go on an overseas expedition by ourselves." And she endured public criticism for attempting to summit Everest with a 3-year-old child and husband "left" at home.

“We were told we should be raising children instead,” she told The Japan Times in 2012.

Tabei remained an avid hiker her entire life; her final summit came in 2011 when she climbed Mount Fuji with a group of high school students, according to Japanese news agency NHK. She was diagnosed with cancer four years ago, and died at the age of 77.

You can check out an interactive Google map of Tabei's lifetime of prolific climbs on her website.

Junko Tabei (left) pictured in 2005 with Pang Duo, the second woman to reach the Everest peak.
Devendra M. Singh/Getty Images
Climbing Everest wasn't a one-off for Tabei, who was a lifelong climber.
John Van Hasselt/Corbis/Getty Images
Now That's Interesting
Sir George Everest, the Welsh geographer and surveyor after whom the mountain was named (against his wishes, by the way), pronounced his surname eev-rest, rather than ev-er-est.

Cartoonist Jack Chick Dies, Having Offended Pretty Much Everyone

Small Lies Build Up the Brain's Tolerance for Being Dishonest 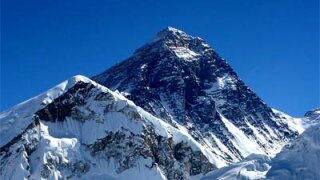 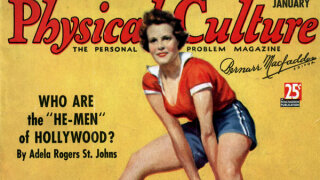 When Exercise and "Physical Culture" Became Good for Women, Too 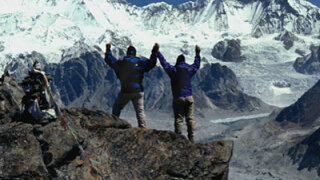