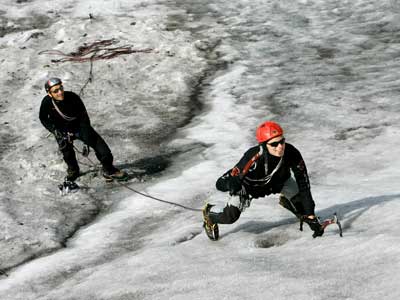 Ice climbing is dangerous in more ways than one. First of all, you need to protect your body from the elements by wearing layered clothing and dry gloves. Avalanches can happen without warning. Austrian climber Hari Berger died in 2006 after becoming trapped under 150 tons of ice during a routine training session [source: Dewell]. There's also always the risk of falling into a deep crevasse, hidden by a layer of snow. But without a doubt, the biggest precaution you must take while ice climbing is employing fall protection.

Ice climbers, like rock climbers, use belays as a safety measure during climbs. In fixed belaying, the climber wears a harness with a rope attached, and the rope prevents him or her from falling very far in case of a slip. Climbers usually belay in pairs, with a designated partner who remains on the ground and controls the rope. (Read more about the mechanics of belaying in "How Rock Climbing Works".) If more than one person is climbing, they employ running belays. As the lead climber progresses up the slope, he or she will place ice screws and clip the rope into those screws. The follower continues behind the leader, removing the lowest ice screws along the way. In a running belay, all climbers and ropes are on the ice, moving together. Experts recommend having at least two ice screws anchored at all times for backup safety. Climbers can also carve their own anchors out of ice -- this anchor is called a bollard -- and place the rope around those. Another option is to create a 'V'-shaped tunnel with ice screws, which is called an Abalakov after its innovator, and run the rope through that tunnel. Of course, the latter options take much longer to set up. Sometimes you can find natural anchors -- strong ice columns or rock protrusions.

When placing ice screws, it's important to ensure they're solidly secured in the ice. Clear away any soft ice or snow and start a hole using the pick on your ice tool. Secure the screw at about a 10-degree angle uphill from the direction of expected pull. The pull is the direction in which the rope will pull in the event of a fall. This means that if you're climbing on a steep or vertical surface, the screw would face slightly downward. Make sure you place screws at least 2 feet (0.6 meters) apart. Advancements in screw designs, like rotating handles, make it less laborious to get them into the ice. Keeping your screws sharpened and clean will also make this process easier.

Remember that once you reach the top, you'll still need to get back down. Plan your climb so you have enough time to make a safe descent. Nobody wants to climb down the side of an icy slope in the dark. You'll probably be tired and sore on the way down, so be extra careful.

Climbers should always carry first aid kits along with their gear. The pros advise a working knowledge of first aid, including how to apply a tourniquet, splint or treat frostbite. Gadgets, too, are every climber's friend. A handheld GPS device can help you find your way in the deep wilderness. Carrying an avalanche beacon is a lifesaver, assisting rescuers in locating you and your friends should you end up in that scary situation. And don't forget a shovel. It doesn't need batteries and can help you out of snow.

Ice climbers have instituted a series of technical ratings and grades for climbs, which helps you know what to expect. The ice rating system in North America has three categories: WI for water ice, AI for alpine ice, and M for mixed. Grades go from one to seven, with one being the easiest and seven being the most difficult.