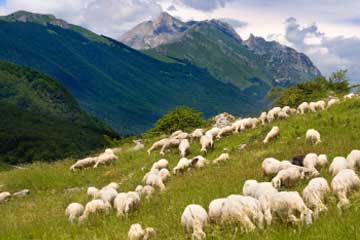 Back in the day, anyone who tended a flock like this likely spent time schlepping up mountainsides. See more pictures of Italy.
©iStockphoto.com/seraficus

Throughout history, people have been faced with obstacles. Sometimes the obstacles came in the form of repressive dictators or lean growing seasons, but at other times, they were direct and tangible -- take mountains, for example. Before cars, trains and airplanes, if someone wanted to travel from one side of a mountain range to the other, it was a lot trickier than simply navigating sharply winding roads. Welcome to the world of hoofing it.

Speaking of hooves, to uncover early incarnations of mountaineering you simply need to determine which historic professions would have required people to putter around near the summits of mountains. Shepherds are a good example: In order to follow their flocks of sure-footed sheep, shepherds were often forced to cover terrain that others would have bypassed for flatter lands. By doing so, they picked up the basic skills needed to manage the steep slopes, as well as developed the rudimentary gear to make the task easier.

Pinpointing the exact inception of any sport is tricky, however, especially when you figure in the hometown pride factor -- athletic enthusiasts love having a claim to fame, and similar ideas often develop simultaneously in separate locales, leading to competing claims. Plus, there's the matter of determining what event truly counts as a definitive start. For instance, when does a shepherd's trek turn into sport? When he leaves the flock to the care of his sheepdog and ventures off for little side jaunt? There's certainly been a lot of gray area as rock climbing evolved and entered its current recreational incarnation. Further complicating the question are others: What exactly is rock climbing? And how closely is it related to mountaineering? What different styles can it be broken down into?

But this isn't the history of some ponderous intellectual game like chess; this is rock climbing! A sport renowned for its extreme physical challenges and surging adrenaline rushes. On the next page, we'll take a look at some of the early adventurers in the world of rock climbing. 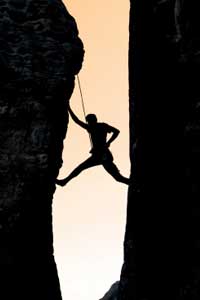 How Sailboats Work
Could Turkey Trots Get a Whole Nation to Run?
How White-water Rafting Works